Longtime horseman, rancher, photographer and lover of the Old West honored for his lifetime achievements. 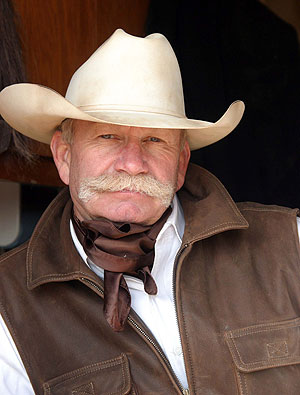 Bob Moorhouse will be presented the Golden Spur Award for his outstanding contributions to the ranching and livestock industry. Photo by Wyman Meinzer.

The true West will be celebrated Oct. 4 during the 31st annual National Golden Spur Award Dinner, this year recognizing Bob Moorhouse of Seymour and his achievements and contributions to the livestock and ranching industries.

An outstanding horseman, Moorhouse is widely known for his interest in the Old West and for preserving ranching traditions while he served as the sixth vice president and general manager of the Pitchfork Land & Cattle Co. in Guthrie.

The award will be presented by another horseman, Buster Welch of Rotan. The Golden Spur Award Dinner begins at 6 p.m. at the Lubbock Memorial Civic Center, 1501 Mac Davis Lane. It includes a reception and silent auction. Tickets available from the Ranching Heritage Association are $50 each, with reserved tables for six priced at $650 and tables for eight $1,000. Call Tim Bynum at (806) 742-0498 to make reservations.

This award, the only national one of its kind, recognizes outstanding contributions to the ranching and livestock industry. Besides bringing prestige to an individual, the award spotlights the humanistic and scientific contributions of the livestock and ranching industries to society.

Moorhouse was nominated for the Golden Spur Award by the American Quarter Horse Association (AQHA).

“I guess everybody knows I’m enthusiastic about cowboys and the cowboy heritage,” said Moorhouse. “Cowboys have pride. It’s a tough life. It’s got to be in your blood.”

A Lifetime of Dedication

Among the ways Moorhouse has brought distinction to the American cowboy, and particularly to the Pitchfork Ranch, is through his photography. Following in the long shadows of early great Western photographers such as Erwin E. Smith and Ray Rector, Moorhouse has made people throughout the world aware of the real face of American ranching.

Stories about him and his horsemanship, ranching acumen and photography have been printed in such publications as The Cattleman, Western Horseman, The American Quarter Horse Journal, American Cowboy, The Horse in Art, the Texas Techsan and more. His photographs have appeared on numerous magazine covers and in exhibitions. “Hoofbeats on the Pitchfork Ranch,” produced by the AQHA, traveled throughout the United States and Europe.

Among his published works is the book “Pitchfork Country: The Photography of Bob Moorhouse” written by Jim Pfluger and published by the National Ranching Heritage Center. The book showcases the beautiful, almost mystical photos taken by this highly respected horseman/photographer.

Even though he enjoys photography, horses are Moorhouse’s passion. He has won two National Ranch Working Horse Championships and one Reserve Championship in Abilene on his horse “Tex.”

Tickets from the Ranching Heritage Association are $50.
Reserved tables for six are $650.
Tables for eight are $1,000.

A 1972 Texas Tech University graduate of the College of Agricultural Sciences and Natural Resources, Moorhouse is retired from the Pitchfork but remains on the ranch’s board. He is also a director of the Texas and Southwestern Cattle Raisers, AQHA, the Working Ranch Cowboys Association, the Ranching Heritage Association’s National Advisory Board and the Ranch Horse of America Association.

In January 2002, Moorhouse was inducted into the Texas Cowboy Hall of Fame in Fort Worth, and he has also been presented with a bronze star on the Texas Trail of Fame. He is a Distinguished Alumnus of the Texas Tech College of Agricultural Sciences and Natural Resources. After retiring from the Pitchfork in 2007, he has been a representative for Carhartt.

Bob and his wife, Linda, are the parents of two grown daughters, Keri Ann Moorhouse and Amy Moorhouse Lee.

Each year, the National Golden Spur Award recognizes the lifetime achievements of one of the nation’s top ranchers. The idea for such a national award originated in 1974. Members of the Ranching Heritage Association (RHA), the support organization for the National Ranching Heritage Center, saw the need for an award to recognize and honor persons who have brought distinction to and made significant contributions of national importance to the livestock and ranching industries.

Award recipients are selected by a committee representing each of the sponsoring organizations. National Golden Spur Award recipients have included individuals from across the United States and represent virtually every aspect of the livestock and agribusiness industry.