For the third straight year, Texas Tech has moved up the rankings for best undergraduate engineering program. 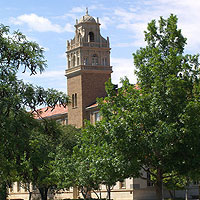 The educational experience in the College of Engineering is only getting better, according to U.S. News & World Report’s 2009 college rankings.

In the magazine’s yearly assessment of America’s best schools, Texas Tech’s undergraduate engineering program is now tied for 78, up from an 85 ranking for 2008 and from rankings in the 90s prior to that. The undergraduate program rankings are based on peer assessments only.

Pamela Eibeck, dean of the college, acknowledged an increase in national visibility as more faculty write proposals and papers and more of Texas Tech’s programs and research gain high-profile status.

“We appreciate that the U.S. News ranking verifies what we have known all along: Texas Tech’s College of Engineering provides one of the best engineering educations in the nation,” said Eibeck. “Our dedicated faculty, outstanding laboratories and supportive environment provide a superior engineering education, allowing our graduates to become technology leaders throughout the world.”