The Southwest Collection and Special Collections Library draws on dozens of collections to showcase medieval Southwest. 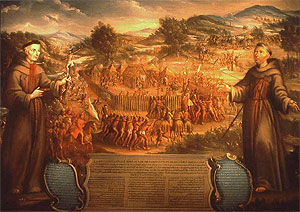 The “Medieval Southwest: Manifestations of the Old World in the New” exhibit will showcase the Southwest as it was during the days of Coronado. Image of "The Destruction of Mission San Sabá," 1765.

For nearly a year, the Southwest Collection and Special Collections Library will give its entire exhibition space over to a time when the American Southwest was the domain of conquistadors and Spanish missionaries.

“Medieval Southwest: Manifestations of the Old World in the New,” opened Aug. 26 and will continue through April 4, 2009.

The multidisciplinary collaboration will draw on the expertise of historians, musicians, architects and anthropologists; utilize the resources of Texas Tech campuses on two continents; and tap dozens of collections of rare and precious items to give visitors a glimpse of the Southwest as it was during the days of Coronado and Mission San Sabá.

To the accompaniment of period music, people will view armor and weapons used by the conquistadors and their European counterparts, such as crossbow points from 1542, a wheel-lock carbine from 1610, and a Charleville flintlock musket from 1750.

Exhibits will display buttons, coins and pottery recovered in archaeological digs, and rare books and maps never before displayed to the general public. A rare, 16th century leather and embroidered Spanish trunk and a partial, elaborately carved Italian suit of armor demonstrate the work of highly skilled artisans of the end of the middle ages into the Renaissance.

Other metalwork includes a Spanish lion, decorative detailing for bridle wear and weaponry, and carved jewelry. Rare engravings and woodcuts on display, among them Our Lady of Guadalupe and one of the first depictions of buffalo, have printing dates between 1531 and 1797.

Texas Tech researchers, based at the university’s campus in Seville, Spain, scoured the archives there for the original plans for San Sabá mission and presidio. The ruins, near present-day Menard, are being excavated by teams from the university. Unique artifacts will be displayed with a large reproduction of “The Destruction of San Sabá,” the earliest painting to depict an event in Texas history.

Funds to research and mount the Medieval Southwest exhibit were provided by Helen Jones Foundation Inc., Humanities Texas and the Program for Cultural Cooperation between Spain’s Ministry of Culture and United States Universities.

The Southwest Collection and Special Collections Library is the regional repository for historical information pertaining to West Texas and the Southwest.

It has collected and makes available for research more than 1,800 collections of personal papers and more than 5,000 hours of oral history interviews, noncurrent business and institutional records, as well as a noncirculating library of Texana, Western Americana, maps, periodicals, photographs, newspapers, taped interviews, films, videotapes and microfilm.

The Southwest Collection also houses one of the nation’s most important collections on the Literature of Place—the James Sowell Family Collection in Literature, Community and the Natural World.