A study of more than two dozen area farms shows a decreasing trend in cotton farming on the South Plains. 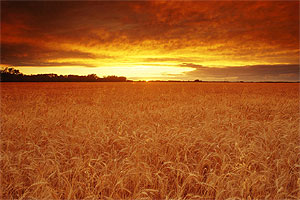 According to researchers, high demands for biofuels and higher grain prices have led to a decrease in cotton production on the South Plains and an increase in the production of corn and grain.

As grain prices spike on the back of biofuels demand and the Plain’s burgeoning dairy industry brings an influx of hungry milk cows to the region, South Plains producers are increasingly giving cotton acreage over to crops such as corn and sorghum.

Or, at least, that’s the trend researchers have found in the 26 Hale and Floyd county farms participating in the eight-year Texas Water Conservation Alliance (TAWC) study.

“That’s the trend we’re seeing – at least with this demonstration – but it may be fairly consistent across the South Plains,” said project director Rick Kellison, a research associate at Texas Tech.

Since 2005, participating producers have reduced cotton production by around 25 percent while increasing corn acreage by 50 percent and grain sorghum by 17.5 percent to take advantage of escalating grain prices.

The TAWC, a $6.2 million undertaking partnering Floyd and Hale county producers with industries, universities and government agencies, aims to extend the life of the Ogallala Aquifer while maintaining profitability for farmers and communities.

It uses on-farm demonstrations to probe variations of crops and livestock grazing. The results will help determine production practices, technologies and systems that can maintain individual farm profitability while getting the most water efficiency.

Rick Kellison is the project director for the Texas Alliance for Water Conservation and a research associate at Texas Tech University.

Archways: Solving the Major Issues Concerning the Lifeline of Water

Can They Save the Ogallala?