Shelter in the Storm 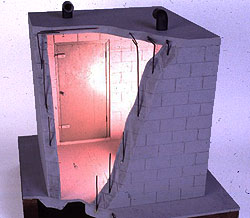 Safe rooms such as the one shown here, can be built into a new home or modified into an existing home’s space.
A new set of construction guidelines will increase public safety for people evacuated to storm shelters and those who use safe rooms in their homes during hurricanes and tornadoes. Ernst Kiesling, professor of civil engineering, was instrumental in creating the concept of the above ground storm shelter or Safe Room in 1974 and has continually worked toward shelter quality and standards development. The International Code Council/National Storm Shelter Association (NSSA) Standard on the Design and Construction of Storm Shelters, recently approved by the American National Standards Institute as an American National Standard, offers new guidelines for community shelters and residential safe rooms. It also consolidates previous references published by NSSA, the Federal Emergency Management Agency and the American Red Cross. One feature of the new standard increases minimum wind resistance requirements in the event of rare but strong storms. “This announcement represents a major milestone for the NSSA and for those who have worked in the storm shelter industry,” said Kiesling. Now executive director of the NSSA, Kiesling has more than 30 years of experience in the field documenting debris damage and testing different materials and types of construction. Although there are a variety of products available for homes, Kiesling said, many shelters are not being designed by engineers or architects who are familiar with the wind loads present during tornadoes. Kiesling said NSSA members now offer a wide range of shelter types so that individual preferences and circumstances can be accommodated. “Good design, construction and installation result in shelters that offer a high degree of safety at minimum cost,” said Kiesling. The Wind Science and Engineering Research Center tests the strength of building materials using a wind cannon that allows simulation of debris hurled by the most intense tornadoes seen in the United States. Tests have been performed on dozens of products for an international slate of manufacturers and organizations including the Portland Cement Association, the Engineered Wood Association and numerous shelter manufacturers. The Storm Shelter Standard is expected to be published in September for communities to adopt. It also will be considered as a referenced standard included in the 2009 International Building and Residential Codes when Code Council holds its Final Action Code Development Hearings in Minneapolis Sept. 17-23.

Ernst Kiesling is a professor of Civil Engineering in the College of Engineering.

The Wind Science and Engineering (WISE) Research Center is a comprehensive and interdisciplinary research program focused on education and information outreach.

What It Feels Like... To Shoot A 2x4 Through A Brick Wall