Author David Callahan explains why breaking the rules has become acceptable in society, and discusses ways to offset the growing trend. 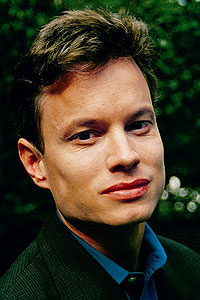 David Callahan is the author of six books and has appeared as a commentator for CNN, CBS, Fox News and other television programs.

Cheating could become as American as apple pie.

According to David Callahan, author of “The Cheating Culture: Why More Americans are Doing Wrong to Get Ahead,” even straight-laced citizens may find it harder and harder to play by the rules.

Callahan opens the fall season of the 2008 Presidential Lecture & Performance Series with his lecture at 3:30 p.m. Sept. 8 at the Allen Theatre.

The drive to get ahead at any cost has created a culture that accepts cheating as a viable means to an end, Callahan said. Because it happens more and more often, people begin to believe that it’s acceptable behavior.

“The worst part of the cheating culture is the way that even good people can be drawn into unethical behavior,” he said. “When it seems everyone is cutting corners and getting rewards for cheating, it can be hard to abide by your own high standards. I’m worried our society has been overtaken by a set of values focused on money and self-interest, and the values of giving back to others and being a good citizen are being pushed to the sidelines.”

Though being honest may feel harder to do today than it did in the past, Callahan said it’s not too late for society to change.

“Widespread cheating in America today reflects negative shifts in our economy and culture,” he said. “But none of these changes are set in stone. We can successfully push back against the cheating culture by taking actions at different levels: Changing how we live our lives individually, changing institutions like universities and changing society through public policies.”

Texas Tech University is the seventh university Callahan has visited this year, and the 75th since the book was published in 2004. He said he feels it’s important to discuss cheating with university students.

“What happens on university campuses matters a lot,” Callahan said. “It’s usually the next generation coming up, not the generations in power that push social change. Often, change starts at universities. Students also comprise the next generation of society’s leaders. There are many things students, faculty and staff can do to be a part of the solution.”

Prior to his lecture, Callahan will sign books from 2-3 p.m. outside the Allen Theatre. The event is free and open to the public. This event is co-sponsored by the Graduate School through funding from the Helen Jones Foundation, and presented in support of the university’s Ethics Initiative.

Words and music will dominate the Presidential Lecture & Performance series as organizers hope this year’s fall season will build upon last year’s success and expand to appeal to campus and community alike.

“In the third year, we’ve continued to seek programs with a broad appeal,” said Mary Jane Hurst, performance series organizer and faculty assistant to the president. “We’re going to continue to get all parts of the campus involved by seeking events with specific academic connections. That is how the series is different from just an entertainment venue.”