Department honored for its support of minority and underutilized businesses through small business workshops held across West Texas. 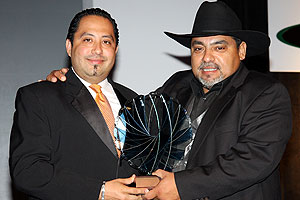 HUB manager Lorenzo “Bubba” Sedeno (Left) received the Public Agency Advocate of the Year Award from the TAMACC Vice Chairman of Communications Rick Reyes.
Lorenzo “Bubba” Sedeno, manager of the Texas Tech University Historically Underutilized Business (HUB) operations, has received the Public Agency Advocate of the Year Award from the Texas Association of Mexican American Chambers of Commerce (TAMACC). The award recognizes Sedeno’s efforts to bring historically underutilized businesses together with state agencies and the Texas Tech University System’s efforts to increase minority participation in Texas Tech’s procurement process. The award was presented Aug. 2 at TAMACC’s annual convention in Austin. “This award recognizes the work of a lot of people,” said Sedeno. “While I am extremely honored to receive this award, it is the work of many offices at our universities that made it possible. Texas Tech has worked hard to not only increase our own HUB numbers, but to also reach out to small businesses in West Texas to give them a way to make connections with state agencies.” Sedeno has served as vice president of the State of Texas Historically Underutilized Business Discussion Workgroup Committee, and has put on five workshops in Lubbock, El Paso and Midland/Odessa to teach small business owners how to do business with the state. “By offering these workshops, we have saved small business owners time and money and hopefully increased their ability to acquire state contracts,” said Sedeno. “It is difficult and expensive for these small business owners to travel to Austin. These workshops have brought as many as 65 state agency procurement officers to the businesses. “Mr. Sedeno was one of several persons who were submitted as candidates for the award,” said Frank Cortez, TAMACC president and CEO. “Mr. Sedeno was chosen as the winner by an independent committee for his tireless efforts to increase minority HUB participation in all of Texas Tech’s contracts and as a strong proponent of minority procurement programs across the state of Texas and for his involvement with non-profit organizations and TAMACC.” Texas Tech’s use of HUB vendors also has dramatically increased in the last six years. Jim Brunjes, chief financial officer for the Texas Tech system, credits Sedeno’s work with bringing the systems HUB utilization from 3.5 percent in 2002 to 23.1 percent in 2007. “It is a priority of all of our universities to do business with historically underutilized businesses,” said Brunjes. “Recognition for all our efforts by an organization of TAMACC’s stature tells me that we are proceeding in the right direction. Bubba has played a key role in our success as have all our HUB coordinators, he deserves the recognition.” Sedeno, a Lubbock native, joined Texas Tech in 1997. He became manager of HUB operations in 2002. Before joining Texas Tech he served as district manager and legislative assistant to State Senator John T. Montford for 13 years, handling numerous assignments, from working on his legislative program to overall management of the senatorial district offices in Lubbock, Big Spring and El Paso.

The Historically Underutilized Business (HUB) Department at Texas Tech University is part of the Division of Procurement Services.

HUB provides opportunities for small-disadvantaged businesses to compete for the university's purchases and contracts.

TAMACC is a private non-profit corporation founded 32 years ago by a small group of Hispanic business persons interested in increasing business opportunities for themselves and other similar business owners.

The association, with headquarters in Austin, acts as the organizational umbrella providing advocacy, technical support, programs and services to the network of local Hispanic chambers.