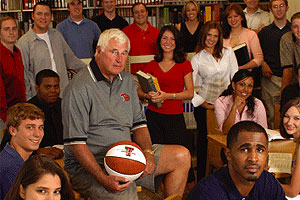 The Texas Tech University Libraries’ exhibit, “A Legacy of Giving: The Bob Knight Exhibit,” has touched down at Lubbock Preston Smith International Airport.

The exhibit, designed by Lubbock-based Design Envy, features 16 seven-foot color panels portraying different stages of Knight’s life and career. The panels can be viewed in the corridor between the rental car counters and the Southwest Airlines’ baggage claim (baggage claim two). The exhibit is open through March.

The Libraries chose to install the exhibit at the airport to thank Coach Knight publicly and to share his legacy with not only Lubbock, but also with the world of travelers passing through Hub City turnstiles.

Kelly Campbell, deputy director of finance and administration at the airport, said the airport is excited about hosting the exhibit.

“We are delighted to have the Coach Knight exhibit displayed inside the terminal building of the airport and look forward to working with Texas Tech library staff in the future,” she said.

Even though Coach Bob Knight has retired, he remains a full-time supporter of the Texas Tech Libraries.

“I can tell you that university libraries are the driving force behind academic standing,” he said. “There is no facet of the university that assists more students and faculty in as many ways or as often as our libraries.”

Since his arrival in Lubbock almost seven years ago, Knight has helped the Libraries raise more than $300,000 through his Coach Bob Knight Library Fund – nearly a third of the way to his goal of $1 million.