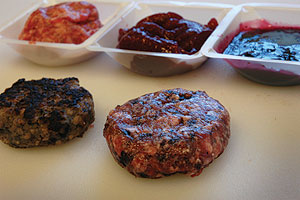 For years experts have said breakfast is one of the most important, yet most overlooked meals of the day, especially for children.

Schools do what they can to make sure students are provided with a well-rounded and nutritional breakfast and lunch. Even so, students will not always take advantage of everything offered in the lunchroom, especially the healthier selections.

So how do you get kids to eat healthy?

The question started the ideas flowing for Jennifer Leheska, then a doctoral student in meat science at Texas Tech University. She found troubling statistics while researching programs though the National School Lunch Program.

“Statistics showed fruits and vegetables are consistently the most wasted foods served,” said Leheska. “However, most entrees and starches were well received. And that is really what started the idea of trying to get an extra serving of fruit into children’s diets. Mixing fruit with something kids were already eating made the most sense.”

Through conversations and suggestions from colleagues, the idea of Blueberry Sausage was born, and eventually resulted in an article in the Journal of Food Science.

“We add a blueberry puree to the sausage during the grinding process,” said Mark Miller, a professor of meat science at Texas Tech University. “The sausage is then formed into patties and is ready to cook.”

An important factor in determining the success of the project was how the sausage tasted. To answer that question, a panel of children ranging in age from 10-12 years old participated in a taste test. 90 percent of the children surveyed said they would like to eat the blueberry sausage again.

Even though sensory panels deem blueberry sausage a success in terms of taste and improved nutritional value, Leheska, who now is a Human Nutrition Research Consultant for the Beef Industry says it is probably cost prohibitive for many schools with tight budgets. However, she does believe the blueberry sausage will have a bright future in niche markets across the country.

Markus Miller is a professor of Meat Science and Muscle Biology in the Department of Animal & Food Sciences in the College of Agricultural Sciences and Natural Resources.

Beat the Heat with COWamongus!