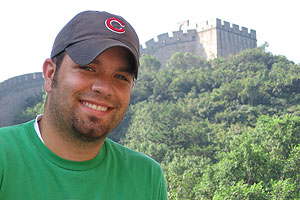 Alumnus Sean Kern traveled to Beijing China for the 2008 summer olympics as part of an internship with the United States Olympic Committee. What began as a graduate program requirement has turned into the experience of a lifetime for one recent Texas Tech University graduate from Wichita Falls. An internship with the United States Olympic Committee (USOC) landed Sean Kern in Beijing for the 2008 Olympic Games. “The atmosphere surrounding the games is incredible,” said Kern, who completed his master’s degree in sport management in May. “I’ve never been involved in something of this magnitude. The work experience in this environment is something I don’t think I could get anywhere else. I mean, this is one of the largest sporting events in the world.” Throughout his internship, which began in January in Colorado Springs, Colo., he dropped hints that he would like to go to Beijing for the games, but didn’t think a spot would become available. About three days after graduation, his hopes became a reality.

Kern arrived in Beijing on July 14 and will remain until the games are over. “I still can’t believe I’m out here,” said Kern. “Working at the Olympics is a great honor for me. I never thought that I would be doing something like this. I feel really blessed because I get to experience a few events first hand as well as the behind-the-scenes action.” Kern works at the U.S.A. House, which offers hospitality to the USOC board of directors, donors, VIPs, sponsors and athletes. Initially, he helped set up the house which is staged in a building that once housed a nightclub and a restaurant. Now he works with a team of three others organizing transportation to different venues and events. “This doesn’t seem like a very difficult job, but we can’t communicate easily to any of our drivers because we don’t speak Mandarin and the people we are responsible for are constantly moving from place to place for different events,” said Kern. “Plus, our staff has transportation needs as well. It’s not such a bad job though, I’ve loved being in the mix since day one.” Kern said he gets along well with the team of people he works with and they are able to make their work enjoyable. “The people that I’ve been working with are awesome. It really is like a second family,” he said. “We all know what our job is, and we get it done, but we have a lot of fun in the process.”

Taking in the Sights

Since arriving in China, Kern has been to Tiananmen Square, and hopes to visit the Forbidden City and the Temple of Heaven after the games are finished. But his favorite memory so far was getting to see the Great Wall. “The pictures that I’ve seen don’t do it justice,” he said. John Miller, associate professor of sport management, was Kern’s graduate advisor and professor. He said Kern was one of only a few USOC interns asked to go to Beijing. “This provides global exposure not only for the sport management graduate program, but also for the university overall as a place that students can learn and grow,” Miller said. “When you consider that Sean was among a select group to be asked to do this, I believe it puts Texas Tech in a very positive light nationally and internationally.”

The Department of Health, Exercise and Sport Sciences is located in the College of Arts and Sciences.

The Department offers Bachelor and Master of Science degrees as well as three collaborative doctoral programs in three major divisions: