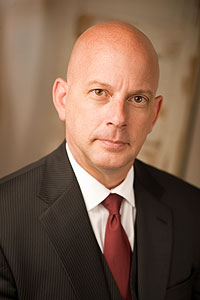 Alumnus Jerry Beard is an assistant public defender out of Fort Worth and also serves as professor of Federal Criminal Practice Skills at the School of Law.

For a lawyer, the odds of representing a client in front of the United States Supreme Court can be compared to the odds of winning the lottery.

Jerry Beard, a 1991 School of Law graduate and adjunct professor, not only beat the odds, but also secured a unanimous victory when the Supreme Court ruled in favor of his client, Humberto Regalado Cuellar, overturning a judgment made by the lower appeals court.

Cuellar, a Mexican national, was charged with international money laundering when he was caught with $83,000 secreted cash as he drove south toward Mexico, Beard said.

Beard challenged the conviction and argued that more than “mere concealment” of money is necessary to prove money laundering. The case essentially establishes what the government must demonstrate to determine a money-laundering service.

“The high court explained that ‘how’ money is transported is not the dispositive question,” Beard said. “Rather, the critical question is ‘why’ the money is being transported. Because the government’s evidence did nothing to address this question, the court reversed Cuellar’s conviction.”

Beard said that while all appellate practitioners dream of arguing before the high court, he never actually expected to do so.

“The odds are so improbable of ever having a case wind up before the justices,” he said. “So, when I learned that the court had granted certiorari, and that I would, in fact, have the opportunity to argue, I felt as though I had won the appellate lottery.”

Beard, who works as an assistant public defender out of Fort Worth, said although he remained convinced his interpretation of the money-laundering statute was the more rational one, he was anxious about the verdict.

“I was extremely nervous as I picked up the telephone,” he said. “But, after I listened to the clerk announce that we had won, I was amazed and grateful that we had secured not only a win, but a unanimous decision at that.”

Training Lawyers for the Transition

Aside from practicing law, Beard also teaches a Federal Criminal Practice Skills class at the School of Law.

He responded to an inquiry from the law school about the possibility of teaching a federal criminal skills course and the administration gave the green light for development of a seminar-based course that would offer co-instruction from a federal prosecutor and federal defense attorney.

The course is specifically designed to initiate the transition from law student to law practitioner.

When Beard is not teaching or practicing law, he enjoys spending time with his two children, Amber and Austin, as well as traveling.

Beard said he learned a lot from representing a client in front of the Supreme Court.

“I learned – and re-learned – that we still live in a nation where a person still has a chance to take his or her claim for redress and to secure ‘justice’ in the process,” he said.