English professor awarded for his second collection of poetry, “Two Men Fighting with a Knife.” 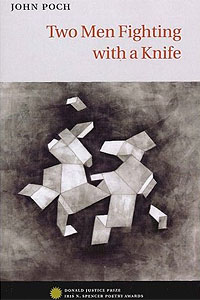 John Poch is poetry editor of the journal 32 Poems. He has written four books and has published poems in many literary magazines.
John Poch, associate professor of creative writing, was one of two winners selected this year to receive $1,000 and a reading at the West Chester Poetry Conference, the largest annual poetry conference in the United States. The West Chester Poetry Conference administers the Justice Prize, and it welcomes unpublished, original book-length collections of poems by American poets. Poch’s poetry collection was selected from 300-400 manuscripts that were submitted this year. “When I found out, I was elated, as the prize is nationally known,” said Poch. “To be associated with the name of Donald Justice, a fine American poet, is no small thing.” He said the first 13 poems are a group of “ghost town” sonnets he wrote while on a Texas Tech University Research Enhancement Fund Grant in northern New Mexico. The rest of the poems discuss a mix of different subjects including pecan trees, stepladders and the Denton police department. One poem, “My Neurosurgeon” is about a recent recovery from spinal surgery and is dedicated to Lubbock neurosurgeon, Mark D’Alise. “In spite of its rueful undercurrent of mortality, ‘Two Men Fighting with a Knife’ is one of the wittiest books I have read in years, full of an active thrust and parry,” said David Mason, Donald Justice Poetry Prize judge. “John Poch mines these poems from a rich vein of American vernacular. He is a raconteur of Texas and ‘the Old West ins and outs,’ offering a range of moods from anger to hilarity and grief, hewing close to actual lives, surprising us with crackerjack phrasing and vital talk.”

John Poch is an associate professor of creative writing in the Department of English in the College of Arts and Sciences.