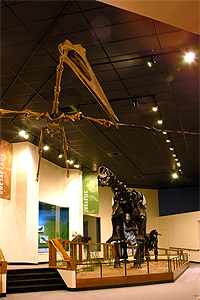 Quetzalcoattus antirrhopus is the largest known flying animal. These large pterosaurs had a wingspan of approximately 40 feet. Photo courtesy MoTTU.
Once upon a time, monsters inhabited our planet. Then they disappeared. “Prehistoric Monsters Revealed,” a new program airing at 8 p.m. Monday (July 28) on The History Channel calls upon the expertise of Texas Tech researchers as scientists try to discover what caused the demise of some of the most ferocious animals ever to walk, swim or fly across the face of the Earth. Sankar Chatterjee, curator of paleontology at The Museum of Texas Tech University and Paul Whitfield Horn Professor of Geosciences and Museum Sciences, said he discussed with show creators the work he and others have done concerning pterosaurs, which were the first vertebrates to fly. These flying reptiles lived 228 to 65 million years ago from the late Triassic Period to the end of the Cretaceous Period. They dominated the Mesozoic sky, swooping over the heads of other dinosaurs. Their sizes ranged from a sparrow to a Cessna plane with a wingspan of 35 feet, he said. Their bodies featured lightweight bones and an intricate system of collagen fibers that added strength and agility to their membranous wings. “These animals take the best part of bats and birds,” Chatterjee said. “They had the maneuverability of a bat, but could glide like an albatross. Nothing alive today compares to the performance and agility of pterosaurs. They lived for 160 million years, so they were not stupid animals. The skies were darkened by flocks of them. They were the dominant flying animals of their time, but they could also walk, run and sail.” Recently, Chatterjee has studied one of the smaller pterosaurs, called a Tapejara wellnhoferi, which featured a large, thin rudder-like sail from its head that functioned as a sensory organ. Though putting the tail section at the nose of an airplane would seem like a design flaw, his research into Tapejara’s movement and flight showed that the rudder served as a flight computer in a modern-day aircraft and also helped with the animal’s turning agility. But not only that, males would use it for sexual display to attract females. “Their locomotion is one of the most complicated things to study because you have to have a complete skeleton,” Chatterjee said. “Their bones were so light they were often crushed throughout the ages. There was no way for us to study such things before the discovery of a complete Tapejara in Brazil about 10 years ago. “We’ve found they could actually sail on the wind for very long periods as they flew over the oceans. They spent most of their time hunting for fish. By raising their wings like sails on a boat, they could use the slightest breeze in the same way a catamaran moves across water. They could take off quickly and fly long distances with little effort.”

Sankar Chatterjee is curator of paleontology at The Museum of Texas Tech. He also serves as Paul Whitfield Horn Professor of Geosciences in the College of Arts and Sciences.

The Museum of Texas Tech University

MoTTU is an educational, scientific, cultural and research element of Texas Tech University.

The Paleontology Division of MoTTU contains A Changing World: Dinosaur, Diversity, and Drifting Continents exhibit which opened in 2004.

The exhibit features large dinosaurs and other creatures, including those from the West Texas region.

Admission to the museum is free. For more information, visit MoTTU online.

Curator To Be Featured on History Channel

A Theory of Flight