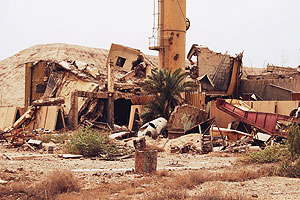 The former Laboratory for Active Metallurgy Analysis will be the first building to be dismantled at the Al Tuwaitha site. The building was destroyed by Coalition Forces in the first Gulf War. See more great photos in our gallery.

Two Texas Tech University researchers participated in a special ceremony that marked the beginning of nuclear dismantlement in Iraq.

Ron Chesser, director of Texas Tech's Center for Environmental Radiation Studies, and Carleton Phillips, a professor of biology who has assisted in Iraq since 2003, both spoke during the event held on July 7 at the Iraq Parliament Building in Baghdad.

"The reason for the ceremony was to celebrate the beginning of the dismantlement of the Al Tuwaitha site southeast of Baghdad, which began on July 1," Chesser said. "The Center for Environmental Radiation Studies program has embraced a boots-on-the-ground approach to science diplomacy. We feel that it is important to work with our colleagues in their country and in their environment. In this way, we learn the special circumstances they face and they can see that we are dedicated to their cause."

The ceremony comes on the heels of the recent removal to Canada of 550 metric tons of "yellowcake" uranium, which can be enriched into weapons-grade nuclear material.

"We at Texas Tech are proud to have played a role in the beginnings of nuclear facilities dismantlement in Iraq," Chesser said. "But this is primarily a proud day for the Iraqi ministries and their dedicated teams of workers who have made this achievement possible."

Dismantlement of the nuclear facility follows Texas Tech's "Train and Engage" program, which trained 27 Iraqi scientists and technicians on dismantlement procedures. This program was funded by Great Britain and conducted in an abandoned city near the Chernobyl nuclear reactor in the Ukraine. The program enabled the Iraqi participants to practice safety procedure training in a radioactively contaminated building. Then, the process was repeated in Iraq where Chesser and Phillips supervised the beginning of the Al Tuwaitha dismantlement process.

Chesser, Phillips and Brenda Rodgers, an assistant professor of biology, have conducted more than 10 different training programs for Iraqi scientists since 2005.

Texas Tech designed the "Train and Engage" program to permit Iraqis to plan and implement the concepts they had gained from their radiation training, Phillips said.

"It is far easier to assert that science and engineering are essential to Iraq's future than it is to make the wish come true," he said during the ceremony. "It is important to appreciate the fact that scientific and engineering capacity requires an infrastructure that includes high-quality education, a strong economy and a supportive and functional government." 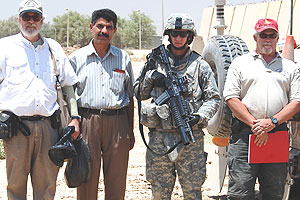 Ron Chesser, far left and director of Texas Tech’s Center for environmental Radiation Studies, and professor of biology Carleton Phillips, far right, stand with troops and a member of their dismantlement team outside Al Tuwaitha.

Thanks to $1.3 million in grants from the U.S. Department of State and the United Kingdom, scientists with the Center for Environmental Radiation Studies can continue dismantling the old uranium enrichment plants, getting a better handle on the public health impact of the contamination and helping train Iraqi scientists to safely continue the dismantling process.

The center will use one of the U.S. Department of State grants to support the center's continued role in the dismantling and disposal of Iraq's former nuclear weapons facilities and for its research on public health in villages close to the main facility near Baghdad, said Chesser. This is the third year of funding for the Texas Tech program, which is an outgrowth of faculty involvement in the reconstruction of science, technology and engineering capacity in Iraq.

Another $438,000 from the State Department will implement a Radiation Worker Safety Program in Iraq. This includes training Iraqi workers on radiation safety and establishing worker training and safety procedure inside of Iraq. The $363,500 grant from the United Kingdom will help train former Iraqi scientists on project management and nuclear facilities dismantling processes.

After Desert Storm in 1991 and the looting in 2003, uranium contamination became a problem for Iraqi villagers who lived near Al Tuwaitha.

Phillips said that Saddam Hussein's weapons program never followed international safety protocol. Now, the new government is trying to follow those international rules by attempting to assess and clean up the mess and protect people living near contaminated areas.

This summer, Rodgers and others will begin a massive public health testing program to determine potential health risks to those living near the contaminated areas.

"The problem is that rumors abound, and there's a lot of presumption that people are being poisoned by radiation," Rodgers said. "Similar rumors led to widespread fear and unsubstantiated reports of death due to radiation sickness from Chernobyl.

"But we want to find out scientifically if there is any danger. If there is, we'll report our findings to the appropriate ministries in Iraq."

The Center for Environmental Radiation Studies is part of the College of Arts and Sciences.

The Center focuses research on the fate and effects of radiation to help reduce risk to human health and environmental contamination.

The Center is in partnership with the International Radioecology Laboratory, in Slavutych, Ukraine, to foster long term radiation research on the Chernobyl accident.

What It Feels Like... To Work in the Zone of Alienation

Growing Up with Chernobyl