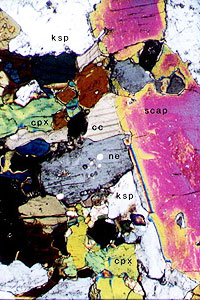 A photomicrograph of a Skarn, a rock formed by chemical transformation following eruptions.
Through an autopsy of an ancient Scandinavian mountain chain, a team of Texas Tech University geologists found that carbon dioxide can create explosive eruptions when magma encounters calcium carbonate-based rocks. This discovery overturns a longtime belief by geologists, who thought that carbon dioxide was incapable of dissolving in magma, said Calvin Barnes, professor of geosciences and lead investigator. Through a grant from the National Science Foundation, Barnes, Aaron Yoshinobu, associate professor of geosciences, and doctoral student Yujia Li, discovered that carbon dioxide is released when magma interacts with rocks such as limestone and marble. The carbon dioxide, when combined with the magma, can create more powerful eruptions. “The main topic of our research involves magma’s interaction with rocks that release carbon dioxide,” he said. “Hot magma melts the calcium carbonate-rich rock, and it mixes with magma much like adding an ingredient to something you are cooking to change the consistency or flavor. This forms bubbles and increases the volume of the magma. In turn, it must be pushed out through an eruption in a manner similar to modern explosive volcanoes in Italy, including Mount Vesuvius.” The geologists’ research is in collaboration with colleagues at the University of Trondheim, the Geological Survey of Norway and the University of Wyoming. So far their research has yielded three papers in journals such as the Norwegian Journal of Geology and Lithos. Several more are pending. Because searing hot temperatures prevent scientists from observing these reactions directly, Barnes studied samples from the ancient Caledonian fold belt in Norway – Scandinavia’s equivalent of the Appalachian Mountains of North America. Erosion has exposed the layers of magma that solidified within Earth’s crust when the Caledonian fold belt was formed, Barnes said. Through chemical analysis, Barnes and Li confirmed that carbon dioxide not only is released when magma encounters calcium carbonated-based rocks, but also that a great deal of calcium dissolves in the magma and equal amounts of carbon dioxide are released. Just as carbon dioxide causes a soft drink to fizz, this caused the magma to bubble and expand until it reached the point of eruption. Barnes’ research coupled with new experiments done by researchers in France and Italy has shown that the contamination of magma by carbonate not only is possible, but also it is capable of explaining many of the unusual characteristics of modern volcanoes such as Vesuvius, an active volcano located east of Naples, Italy, and the Alban Hills, located southeast of Rome. He said that both the Alban Hills and Vesuvius produce unusually high amounts of carbon dioxide during eruptions because the crust beneath these volcanoes contains calcium carbonate-based limestone rocks. Through their research, they can better understand eruptions and calculate the amounts of carbon dioxide released during volcanic activity. Understanding these concepts is important from a public safety standpoint since cities and towns are close to active volcanoes. “It’s useful because a volcanic eruption gives you a snapshot of what is happening beneath Earth’s surface,” Barnes said. “Another positive in what we are doing is the opportunity to expose Texas Tech students to different cultures and environments. Most geologists are international, and they must be willing and able to work in a lot of different places.”

Calvin Barnes is professor of geosciences and Chairperson for the Department of Geosciences in the College of Arts and Sciences.

The Department of Geosciences offers the following degrees:

Areas of concentration include geology and geophysics.