Henryk Temkin honored with a Distinguished Service Medal from the Department of Defense for outstanding public service. 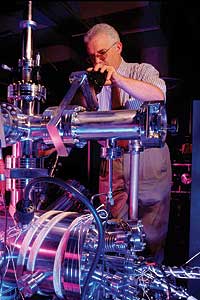 Henryk Temkin is a director of the Nano Tech Center at Texas Tech, a premiere engineering facility devoted to the study of nanotechnology.

College of Engineering Horn Professor Henryk Temkin recently received a Distinguished Service Medal from the Department of Defense and the Aron Kressel Lasers and Electro-Optics Society (LEOS) Award from the Institute of Electrical and Electronics Engineers (IEEE).

The director of the Defense Advanced Research Projects Agency (DARPA), an agency of the United States Department of Defense responsible for the development of new technology for use by the military, presented Temkin with the Bronze Secretary of Defense award for Exceptional Public Service, a Distinguished Service Medal. The award was in recognition of Temkin’s service to DARPA for the past three years.

In addition to being a Horn Professor of Electrical Engineering, Temkin also is holder of the Jack Maddox Distinguished Engineer Chair endowed by the Maddox Foundation, as well as a director of the Nano Tech Center.