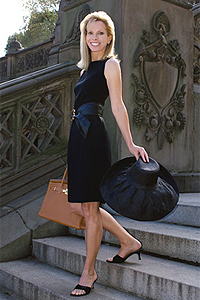 Alumna Linda Francis Lee is the author of 19 novels. Her book "The Devil in the Junior League" has been optioned as a movie, starring Jennifer Garner. Photo courtesy Linda Francis Lee.
For author and Texas Tech alumna Linda Francis Lee, letting her roots show doesn’t mean an emergency appointment with the hairdresser. Born in El Paso, Lee’s family history is steeped in West Texas tradition. Her heritage and knowledge of Texas high society is evident in her latest round of books, “The Devil in the Junior League” and “The Ex-Debutante,” which feature an elite, pearl-wearing crowd of sophisticates who are members of the fictitious Junior League of Willow Creek. “Most of my books have come out of the fact that I am a Texan,” she said. “When you are born and raised in Texas, you are always a Texan.”

Lee followed in the footsteps of her big brother Rick Francis by attending Texas Tech. Her first two years of college were a whirlwind of studying, experiencing college life and attending sorority and athletic events. “Quite frankly, when I was a freshman and a sophomore, I couldn’t imagine what I was going to do with my life,” she said. “My parents were probably worried about me.” But during her junior year, Lee experienced an awakening of sorts. She had her first article, “There Is No Finish Line,” published in a Texas Tech magazine, which ironically became the starting point to her successful writing career. “A light switch flipped on for me,” she said. “I started taking courses in advertising, and I loved it. The world opened up to me, and I realized there was so much out there to experience.” After graduating with a degree in advertising in 1981, Lee began testing her limits with different tasks, everything from rock climbing and running marathons to playing tennis seriously and writing. She used theories she learned in her advertising classes to help develop story ideas. “In advertising, you are telling a small commercial story,” Lee said. “I realized I was taking that premise and using it as a fundamental building block for creating a novel.”

From Big Hair to the Big Apple

Lee wrote her first book in 1990 and admits she was very lucky to have it published. But after establishing a life in Texas with her husband and a new career as a published writer, Lee was stunned when her husband abruptly announced they were moving north. “Everything in the Northeast was different,” she said. “I had big blonde hair and colorful clothes, and clearly didn’t fit in. So I flattened my hair and dressed all in black but still people on the street asked me where I was from. It was clear I wasn’t a New Yorker.” It was then Lee realized what would become the foundation for her next novels. She would focus on those secret handshakes of life everyone has to learn in order to fit in. And what better way to show that than through her world in Texas, Lee said. Only, she would do it bigger and larger than life and make it fun. Lee never admits to modeling the debutantes of Willow Creek after herself. “These characters have nothing to do with me or anyone I know,” she said, laughing. “That’s my story and I’m sticking to it.” She does, however, identify with the recurring theme apparent in most of her books - women searching to find themselves. “Both stories are about women who have to get the rug pulled out from under them in order to find out who they really are, how strong they really are,” she said. “When I turned 20, I started my journey to find myself. And hopefully I will spend much of my life continuing to experience new phases.”

Staying True to her Roots

Writing novels isn’t all glitz and glamour, according to Lee, it is hard work. But she was fortunate enough to learn that lesson early in her writing career at Texas Tech. “I had a professor who said ‘writers write, and they write whether the mood strikes them or not.’ And I have taken that to heart,” she said. “He told the class, ‘If you want to be a successful published author you have to do the work.’” Nineteen novels later, Lee stands by those words and treats her writing career like any other profession, setting goals and deadlines. She writes Monday through Friday, giving herself a quota of pages to finish each day. “If I can write 10 pages in five minutes I’m done,” she said. “And if it takes me all day, then I sit in that chair until I’m done. There are days when writing feels like magic. But even if the magic isn’t there, I have to write anyway. I find it easier to fix pages than stare at blank ones.” Lee says perseverance and moving beyond one’s limitations are the keys to success, not only for writers, but for anyone. “Understand everything you can about any given profession, including that every job has difficulties,” she said. “Then, just go for it. And whatever you do, don’t limit yourself. Don’t hold yourself back.”

Students can choose to major in advertising, electronic media, journalism and public relations.

The college also offers both a Ph.D. and M.A. in Mass Communications, designed to prepare students for careers in communications research and academia.

Find out more about Linda Francis Lee and her books at lindafrancislee.com.

The Devil in the Junior League