William M. Marcy to retire after 34 years of service to Texas Tech. 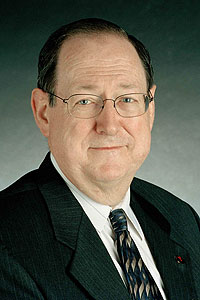 Marcy received his undergraduate, master's and doctorate degrees in engineering from Texas Tech. He plans to return to the faculty on a part-time basis this fall.

High Resolution Image.
Texas Tech University Provost and Senior Vice President for Academic Affairs William M. Marcy announced Friday, June 20 that he will retire, effective Aug. 31, 2008. “In my time as Provost I have done my best to strengthen teaching and research initiatives at Texas Tech. I am proud of the many accomplishments my office has made and I feel now is the appropriate time to step down. I am grateful for the support of the faculty, administration, students and alumni and I am excited about the future of Texas Tech,” Marcy said. Marcy plans to return to the faculty on a part-time basis this fall. A decision as to his replacement will be reserved for the new president of Texas Tech University, expected to be named prior to the beginning of the fall semester. “We are appreciative for the 34 years of distinguished service Dr. Marcy has given to Texas Tech," said Chancellor Kent Hance. "His continued work as a professor and researcher will be a benefit to the university.” Marcy was appointed Vice President and Provost of of the University in July of 2002 and Senior Vice President and Provost in 2004. Prior to 2002 he was Dean of the College of Engineering, starting in 1998. He served as Senior Associate Dean of Engineering from 1995 to 1998 and Chair of the Department of Computer Science from 1987 to 1995. Marcy earned his bachelor’s degree in 1964 and master’s degree in 1966, both in electrical engineering from Texas Tech University. His Ph.D. from Texas Tech was the first Interdisciplinary engineering degree offered in 1972. Story produced by the Office of Communications and Marketing, (806) 742-2136.