Challenge doesn’t hinder graduate from seeing his path to entering the legal profession. 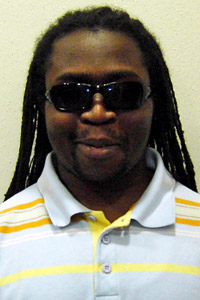 During law school, Earl Oaks was a member of the Criminal Trial Lawyers Association and the National Black Law Students Association.

The standing ovation Earl Oaks received from his classmates as he walked unassisted across the stage at graduation was a testament to his determination and resolve.

On May 10, the 27-year-old earned his law degree from the School of Law and participated in the graduation ceremonies at the United Spirit Arena, a triumph made even more momentous because he is legally blind.

With graduation behind him, Oaks’ next challenge is taking the Texas Bar Examination in July. Meantime, he will study and wait, planning his future course. Most certainly, that future includes criminal prosecution, as Oaks explains, “Criminal law is my first love.”

It Is Whether You Win or Lose

Because of a congenital condition, Oaks learned early in life what it meant to lose. He was completely blind by the age of 5. While other kindergarten children in his hometown of Willis were learning their ABCs, Oaks was learning to read and write in Braille. As he grew up, so did adaptive technology.

Oaks began his undergraduate work at Ohio State University, but returned to Texas and attended Texas Tech. In just three and a half years, Oaks earned his bachelor’s degree in sociology with an emphasis in criminology in 2003.

But early in his law career, Oaks learned about what it meant to win. He participated in the law clinics as a senior law student, assisting Lubbock city attorneys with the prosecution and trial of criminal cases in the City of Lubbock Municipal Court. He even won a criminal jury trial in Municipal Court as a Criminal Prosecution Clinic student.

“Many long-time practicing attorneys have never won a jury trial,” said law school Dean Walter Huffman, of Oaks’ victory.. “Because of his demonstrated skill in the courtroom, he has already been offered a position as a Public Defense Attorney for the State of New Mexico.”

Oaks was assisted throughout his legal education by Amy Jarmon, assistant dean in the Academic Success Program. He received guidance through Jarmon’s office by blind Texas Tech alumni Dax Cowart, who now lives in California, and considers law professor Cal Lewis as a special mentor.

“He helped with much more than the law-related or school-related challenges,” Oaks said. “Cal was more like a father figure.”

The entire law school faculty that Oaks came in contact with was helpful, he said.

Oaks explained that sitting in class being totally blind, one misses power points and notes on the board, and other subtleties of presentations.

His professors were always there to help, Oaks said, and they developed a respect for him. He said he tried to set an example for people in general, having the drive and determination to accomplish his dreams and goals.

“I appreciate them giving me the opportunity to accomplish what I have,” he said. “They helped me tremendously, making accommodations for me, seeing me in their offices.”

In the Lubbock community, Oaks served as a Student Mentor at Parkway Elementary School, teaching, encouraging and counseling underprivileged students.

“Not only did I help them with homework, but also with problems at home,” Oaks said. “I tried to instill in them that college is important, and whatever dream you have, to follow it wherever it takes you. Never give up, never say never and find ways to overcome obstacles. That is my message to the kids out there.”

School of Law in the News