A plant and soil science professor and a Lubbock nurseryman have characterized a new shade-tolerant grass. 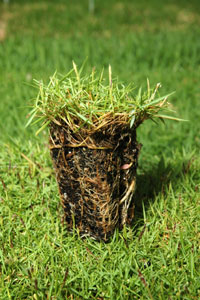 Shadow Turf will grow in areas with 80% to 90% shade and will stay green on as little as 4 inches of water per month.
Rockwell Professor of Plant and Soil Science Dick Auld and his research team have scientifically characterized a new variety of hardy, drought-tolerant turfgrass that grows well under the shade of trees. The patent-pending grass variety will commercially be known as Shadow Turf, but technically it’s a specially selected variety of zoysiagrass that was discovered by Mark Ivey, owner of Ivey Gardens Greenhouses. "This university isn’t an ivory tower," said Auld, who previously served as chairman of the Department of Plant and Soil Science. "We reach out to local businesspeople all the time. This time we were able to get a new product out to the public and that’s a real success story with economic impact to the university." Texas Tech researchers have been working on ornamental turfgrass breeding since 1994, with much of their efforts concentrating on buffalograss. Some four years ago, the turf team produced Turffalo, a buffalograss for homeowners designed to be drought resistant, with root systems sinking up to 10 feet into the ground, while retaining the density and true green color enjoyed with varieties like bermuda or fescue. In the process of developing and marketing Turffalo, the researchers were inundated with requests for some type of grass that would grow under the deep shade of trees. At the time, they were also working closely with Ivey. In 2005, Ivey approached Texas Tech with a special variety of dark green zoysiagrass that grew exceptionally well under shady conditions. Using Ivey’s specimen, Auld and graduate student Brad Sladek began the detailed task of developing a plant patent for Ivey’s zoysiagrass variety. The researchers scientifically characterized the grass, developed trial plots detailing a comparison of the grasses’ growth habits, pinpointed locations where it would produce nationally and mapped a DNA fingerprint identifying the plant. In addition, they looked at the cultural practices needed for it to grow well in Texas and across the region. 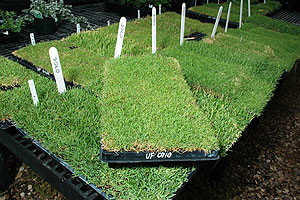 Since 1994, Texas Tech researchers have been working on creating durable, economically and environmentally friendly turf grasses like Turffalo and the new Shadow Turf for residential and commercial use.
Last year, Texas Tech’s Office of the Vice President for Research presented Auld with a $40,000 grant to promote and commercialize the new grass variety. As part of a commercial agreement with Ivey, Texas Tech receives a portion of the royalties from the sale of the grass. "The patent was filed with the U.S. Patent Office in March and we’re just waiting for approval," Auld said. Introduced in the United States in the early 1900s, zoysiagrass forms a dense turf when managed, Sladek noted. Native to China, Japan and other parts of Southeast Asia, the warm-season grass is well known for being extremely drought tolerant, nearly as salt tolerant as bermudagrass, and is among the most wear-tolerant turfgrasses. Moreover, Sladek said it has the added feature of being cold tolerant, which allows it to be used on the South Plains. "A number of our shade-tolerant, warm-season grasses, primarily St. Augustine grass, do not have cold tolerance," he said. "That’s why it’s not often used in this area. zoysiagrass really fits a niche here." The researchers believe their new Shadow Turf will eventually have multiple applications from residential landscaping to golf courses. Right now, considering the way it is propagated, it will likely be first seen among homeowners. Shadow Turf is commercially sold in plug form. The 2x2x3-inch plugs, which average around $90 a flat, are planted nine-to-12 inches apart, depending on how quickly the homeowner wants to cover an area. The slow-establishing grass is normally planted from late May to early June. "The beauty of this story is that we had a small businessman trying to do something entrepreneurial and a major public university with scientific expertise that was willing to do something to help," Auld said. "That’s why we have a commercialized product today." Photos by Norman Martin.

Dick Auld is Rockwell Professor of Plant Genetics and Breeding in the Department of Plant and Soil Science in the College of Agricultural Sciences and Natural Resources.