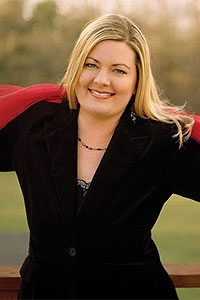 Nolen made her Metropolitan Opera debut in January, as Waltraute in Wagner's "Die Walküre," one week before her 31st birthday. Photo © Harry Heleotis 2007.

Breathe deep, she tells herself. Just breathe deep. Alumna and singer, Laura Vlasak Nolen warms up her voice, preparing to accomplish one of her biggest goals – singing at the Metropolitan Opera. She goes to her makeup and costume call with a million thoughts running through her mind. Her parents flew all the way to New York to see her debut. She thinks about the four weeks of rehearsals it took to get to this performance. She tries to get rid of the butterflies she still gets after five years of being a professional opera singer. It’s time for the curtain. “My debut was a day after my seventh wedding anniversary and a week before my 31st birthday,” Nolen said. “I had told my manager, ‘I want to sing at the Met and make my debut when I’m 30.’” This past January, Nolen made her Met debut as Waltraute in Richard Wagner’s “Die Walküre.” She has performed in more than 40 operas and professionally debuted in 2003 as Third Lady in “Magic Flute” with the Cleveland Opera.

Destined to be a Diva

The life of a singer is not an easy one. Nolen said the politics, energy and rejection are just a few of the things a singer has to deal with in addition to auditioning for roles. “You don’t know where it will take you,” Nolen said. “You know you’re good but you don’t know if you have what it takes to be a singer. You have to believe in yourself as a singer, as an artist, because without it you can’t go anywhere.” Nolen took her first voice lessons when she was 14 years old. During high school, she participated in choirs and was accepted to the Texas All-State Choir. “My teachers always told me I had an operatic voice,” Nolen said. “But I thought I wanted to be on Broadway because I loved the costumes and acting that went along with the singing.” The Garland native auditioned at Texas Tech University and received a scholarship to study vocal performance. There, she got her first taste of solo performances and more experience singing opera. Karl Dent, voice area chair for the School of Music at Texas Tech who was one of Nolen’s professors, said he knew right away that Nolen could make a career out of her talent. “Laura has tenacity and a spirit that knows no boundary,” Dent said. “She’s not afraid to expose herself musically and that’s what makes you successful in this business.” Dent encouraged her to audition for graduate school at Indiana University. According to Dent, Indiana is the top school for operatic performance. “That’s when I realized it was serious,” Nolen said, “that I wasn’t just going to get a degree in music and that would be it.” 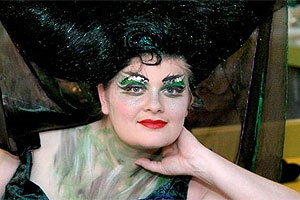 In addition to her appearances with the Met, Nolen also has performed at a variety of venues, from the New York City Opera to her Alma Mater at Texas Tech. Photo of Nolen as the Third Lady in The Magic Flute with Dallas Opera. Photo courtesy Laura Nolen.

Nolen loves the traveling she gets to do with her job, but said it is hard to be gone for long periods of time. When she apprenticed with the Santa Fe Opera, she was gone from her husband, Todd, for three months at a time. She said Todd made it possible to pursue her dream full time and not have to work a day job. He even took his accounting job with IBM in New York so they could live close to the opera scene. When not singing, Nolen loves working on the house she shares with her husband in upstate New York. A self-proclaimed HGTV and TLC junkie, Nolen loves being in her garden and riding the tractor across their two and a half acres of land. If she could change something, Nolen would have been more focused during her undergraduate studies. She joined a sorority during her sophomore year at Texas Tech and said that took time away from her studies. Nolen focused more at graduate school because she had to grow up before she had a career in music. After more than 17 years of singing, her biggest accomplishment is reaching one of her career goals and staying focused. Nolen is thankful she has gotten to a place in her career where she can make a living singing opera and have a manager to book her auditions. “Everything I have is because I worked really hard at it and I love doing this,” Nolen said. Story produced by the Office of Communications and Marketing, (806) 742-2136.

Karl Dent is professor of voice and chair of the voice area in the School of Music.

Dent also is active as a solo singer, performing extensively in oratorio, concert and recital, and has appeared nationally with numerous symphony orchestras. He is also the winner of three Grammy awards.