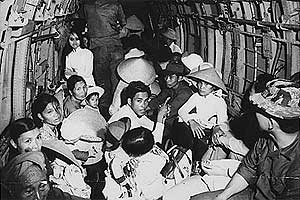 The Families of Vietnamese Political Prisoners Association Collection holds more than 10,000 materials documenting the thousands imprisoned in communist reeducation camps following the Vietnam War.
Texas Tech University’s Vietnam Archive will host the grand opening of its Families of Vietnamese Political Prisoners Association Collection from 3-5 p.m. May 28 in the Marshall Formby Room of the Southwest Collection/Special Collections Library. At the conclusion of the Vietnam War, thousands of U.S. allies, employees and Vietnamese dissidents were imprisoned in communist reeducation camps. The collection provides more than 10,000 primary sources for studying the experiences of these prisoners and refugees and their families who immigrated to the U.S. once they were released. Donated in 2005 to Texas Tech by the Vietnamese American Heritage Foundation, the collection contains 156 linear feet of documents – meaning the materials stretch approximately 52 yards when stacked end-to-end. “We hope this collection will help historians and others understand the experiences of this group of Vietnamese immigrants,” said Ann Mallett, project archivist for the collection. “These people were our allies; they were U.S. employees or they didn’t agree with communism and they were forced into reeducation camps. The collection contains photographs and handwritten letters, so it is very personal, and it gives another piece of the story of the Vietnam War – what happened after the war ended to these people who were our allies.”

Materials include certificates of release for political prisoners in Vietnamese reeducation camps and applications to the United Nations High Commissioner for Refugees’ Orderly Departure Program, charged with protecting refugees. Additionally, copies of documents such as passports, licenses, birth certificates, marriage certificates and educational certificates dating back as far as 1914 will help historians, genealogists and families trace lineage beyond U.S. borders. Many equate the collection to immigration records maintained by the Ellis Island Foundation which every year helps thousands of people chronicle their family histories. The collection also holds letters to and from Presidents Ronald Reagan and George H. W. Bush, Thailand Refugee Camp President Ngo Suu and other dignitaries including Sens. John McCain, Edward M. Kennedy, John Kerry and Bob Dole. Documents were collected by the Families of Vietnamese Political Prisoners Association (FVPPA), which exists to free and help resettle Vietnamese imprisoned in reeducation camps. While the Applications Series of the collection offers a wealth of demographic and genealogical knowledge to researchers, the files contain personal information on more than 10,000 individuals who applied for the Orderly Departure Program. To balance researcher accessibility with privacy concerns, the archive will keep the applications series restricted (closed) for six months. During this time, any person who worked with the FVPPA and has concerns over personal information possibly contained within the records can contact the archive to make the appropriate arrangements to safeguard his or her privacy. The archive has created a Web page where individuals can search a database of applicant file names, but cannot view the content of the files themselves. The page includes contact information for the archive and instructions for individuals interested in restricting their files. On Dec. 1, the Applications Series will be opened to the public for onsite research. Families of Vietnamese Political Prisoners Association Collection Web site will be published on May 28, 2006. Story produced by the Office of Communications and Marketing, (806) 742-2136.

The Vietnam Archive mission is to collect and preserve the documentary record of the Vietnam War.

The Virtual Vietnam Archive is already assisting the Joint POW/MIA Accounting Command by providing Internet access to documents relating to the Vietnam War. These documents thus far have provided 41 actionable clues regarding unresolved MIA cases. The documents also have been used by Veteran’s Benefits Counselors with the U.S. Dept. of Veterans Affairs, who have validated at least 900 Vietnam veterans' medical claims through the Virtual Vietnam Archive.

While the Vietnam Archive continues this commitment as its primary objective, it has expanded its collection policy to include records of veterans' organizations and scholars of the period as well as other individuals and organizations who share experiences from the war in Vietnam.