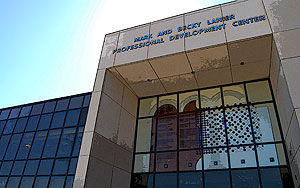 University officials just cut the ribbon on the Mark and Becky Lanier Professional Development Center, complete with a technologically advanced courtroom, 300-seat auditorium-classroom and other amenities.

The School of Law once again led all Texas public law schools with a first-time pass rate of 92.86 percent on the February Bar Examination.

The overall pass rate for graduates of the nine Texas law schools taking the bar for the first time was 85.01 percent.

Walter Huffman, dean of Texas Tech’s law school, said he was delighted and impressed with the performance of the School of Law graduates on the February Bar.

“This 92.86 percent pass rate exceeds even our historically high average,” Huffman said. “I am very proud of both the graduates and the talented faculty that prepared them for this difficult examination.”