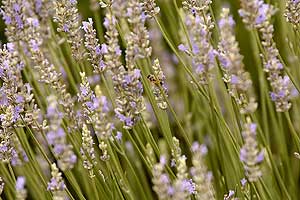 The Joyce Lavender Ranch was founded in 1894 by R.E. Joyce and has been passed down through five generations of family. Photo by Artie Limmer.

It was a weird sort of irony that Gary Yungblut met his wife, Jerilynn, in a botany class at Texas Tech. She was majoring in English, he in business. But neither was aware they’d pair up, start a family and, decades later, put that botany class to use forming the Joyce Lavender Ranch in Hermleigh.

Their story began on campus during the spring semester in 1960. Jerilynn McPherson was a week late to her botany class due to illness and, by a twist of fate, missed her spot on the alphabetical seating chart. She took her seat in the last row next to Gary Yungblut.

“I was seated at the end and he actually moved across the aisle to sit on the same side as me,” said Jerilynn as she recalled the day with a laugh.

On their first date, Gary took Jerilynn to a basketball game, Texas Tech vs. Texas A&M, double overtime with Texas Tech taking the win. Jerilynn, an Alpha Chi Omega, recalls going to dances with Gary and eating at a pizza parlor across from campus. Gary, in the spirit of a true starving college student, remembers the only buffet in town open past 10 p.m.

The two were married in January of 1962, shortly after Gary joined the Navy. Jerilynn finished her last college semester that summer at San Diego State University, earning a B.A. in English and French. They returned to Lubbock a few years later, and Gary completed his business degree at Texas Tech while Jerilynn earned her teaching certificate. 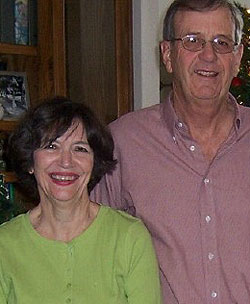 Gary and Jerilynn Yungblut met in botany class at Texas Tech. Nearly 50 years later, they are still together and sharing their love for plants.

The Yungbluts owned land just outside of Snyder, uncultivated, yet brimming with family history. The ranch had passed through five generations of Jerilynn’s family, beginning in 1894 with cattleman R.E. Joyce who raised registered Herefords. The Joyce Ranch was known to cattle buyers all across the country and was popular with F.F.A. students and 4-H members looking to buy prize show calves.

The idea to grow lavender came from the Yungblut's son-in-law, Danny Flanagan. Danny got the idea when he met a lavender farmer from the Texas Hill Country in the early 2000s.

Lavender, a sun-loving perennial plant, was perfectly suited for the sandy loam soil and dry conditions at the Joyce Ranch. The Yungbluts were admittedly clueless about what starting a lavender farm involved, but were eager to spend more time on the ranch as a family.

In 2003, the Yungbluts, with the help of their children and their spouses, planted a test plot with five varieties of lavender and 500 of each plant.

“We’ve killed a lot of plants,” said Jerilynn. “Just because we planted them doesn’t mean they bloomed.”

Just days after the planting, plunging temperatures killed 80 percent of the test crop. It was a disheartening setback for the family, but they tried again in 2004, this time successfully. They settled on Provence and Grosso varieties, and some of the original test plants still bloom each May.

From the top of its blooms down through its stem, every part of the lavender plant produces the oil essential to most lavender products. Each member of the Yungblut family labors to keep the lavender fields tended and weed-free.

In June, when the plants are in full-bloom, the family clips and hangs them in a dark room with ventilation, allowing the oil to seep down into the buds. These are then gathered and sent to Abilene for processing. The women are the brains behind production. Spritzes, linen sprays, soaps, essential oils, dried lavender sachets and lotions are sent to retailers and online buyers from all over the United States.

Each spring, depending on the annual crop, Joyce Lavender Ranch opens its gates to anyone wishing to clip a bud or sit among the purple plants. The “Pick Your Own Lavender” event, usually held in June, brings visitors from all over the state. 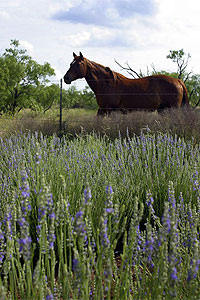 The 700 acre ranch still houses cattle and horses, but the main focus today is on the fields of aromatic varieties of lavender.

There is plenty to see in the springtime; cattle and horses graze among wildflowers in the mesquite-laden, rolling hills of Scurry County. The little lavender ranch overflows with rustic appeal, something Jerilynn said she and Gary hoped to hold on to and reproduce for others, especially their family.

“Our grandchildren have had the opportunity to be out there and really enjoy the ranch the way I did as a child and the way our children did when they were growing up.”

Lavender With a Bit of Red and Black

The family farm isn’t the only legacy being passed down through the generations. The Yungblut's Red Raider ties are stronger than ever. Jerilynn and Gary’s granddaughter, Hillary, plans to attend Texas Tech as a premedical student. She’ll be the fourth woman in her family to take up residence at Knapp Hall and is the fourth generation of the original Joyce family to attend Texas Tech, following in the footsteps of her great aunt, grandparents, two aunts and her dad.

Nearly 50 years have passed since the Yungbluts found love in a Texas Tech lecture hall. Gary said the campus has changed since his undergraduate days, replacing parking lots with buildings, but some things remain the same.

“It still looks like it’s just as far between classes as it used to be,” he joked.

Gary said he enjoyed all his business courses at Texas Tech, but as for his favorite class, only one stands out.

“I guess I better say botany was my favorite,” he laughed. “Because that’s where I met my wife.” 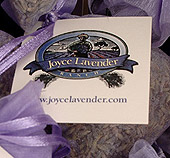 See the breathtaking allure of West Texas-grown Lavender. Walk among the blooms at Joyce Lavender Ranch and cut your own fresh bouquets to take home.

Enjoy the fragrant Provence, the beauty of the deep, brilliant Grosso in a field of 1,500 plants in Scurry County.

You may also take cuttings of organic rosemary for culinary use in your own kitchen or relax with a cool glass of lavender lemonade and a ranch style lunch.