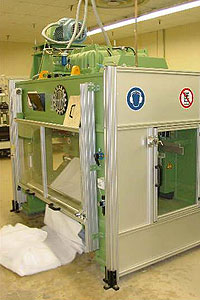 The Nonwoven and Advanced Materials Lab at TIEHH focuses on research and development of materials to help improve human health and the environment.
Texas Tech researchers predict a yearly growth of 13.3 percent for India’s nonwoven and technical textile industry, which is more than twice the annual 5 to 6 percent expected growth patterns in the United States and Europe. The study, conducted at the Nonwoven and Advanced Materials Laboratory at The Institute of Environmental and Human Health, was led by Seshadri Ramkumar, an assistant professor and expert of nonwoven fabric technology, and by Appachi Arunachalam, a visiting scholar from India. The study measured growth opportunities of the nonwoven and technical textile industry in India. Their findings, based on World Bank Statistics of gross domestic product growth data, show the growth and potential of India’s technical textile industry and the consumption of nonwoven technical textiles from 2007-2050. By 2012, they predict India’s technical textile industry will be worth 12-15 billion dollars, which will be 10 percent of the global value. The researcher's findings are contained in a report titled India Rising: Opportunities in Nonwovens and Technical Textiles. This study has been published in leading international textile magazines such as Nonwovens Industry and Textile World Asia. It coincides with the effort of the Government of India to create a National Technological Mission to spearhead the development of the country's technical textile industry. “In this era of globalization, such a study will be useful for the U.S. textile industries to seek joint ventures and collaboration with the emerging market,” said Ramkumar. “By 2035, the growth rate of the nonwoven and technical textile industry will be exponential. However, with the new government initiatives in India, such as the Technology Upgradation Fund Scheme and Special Economic Zones, the growth rate will be much faster.” Already, Ramkumar said India has initiated steps toward the establishment of four centers of excellence: medical textiles, geotextiles, agrotextiles and protective textiles. This offers business opportunities for U.S. and European textile industries to expand and seek new markets. Players such as North Carolina-based Glen Raven and Finland-based Ahlstrom are seizing this new opportunity. For the past four years, researchers at the advanced materials laboratory have worked to bridge the nonwoven and technical textile industry of developed economies like the U.S. and the emerging economy of India. Texas Tech will organize the fifth annual ATNT 2008 Conference on Advances in Textiles, Machinery Nonwoven and Technical Textiles, which runs July 14-16 in Coimbatore, India. The conference fosters relationships between the textile industry of developed economies and India. Story produced by the Office of Communications and Marketing, (806) 742-2136.

Seshadri Ramkumar is an assistant professor of nonwoven materials, and countermeasures to biological and chemical threats at TIEHH.

He is an expert in the field of nonwoven textile technology, and has received national attention for his development of a nonwoven fabric used to neutralize chemical and biological threats which can be made into protective clothing for military use.