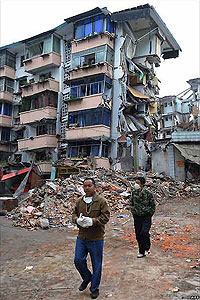 Just 40 minutes before an earthquake measuring 7.9 on the Richter scale struck the Sichuan province in Central China on May 12, a Texas Tech University professor of geosciences arrived in Beijing, only 960 miles away. Hua-wei Zhou, professor of petroleum geophysics and seismology, was about to start work for the National Natural Science Foundation of China to monitor smaller earthquakes near the Three Gorges Reservoir, 250 miles east of the Sichuan earthquake epicenter. Now Zhou is leading a team of six graduate students to deploy 60 seismometers near the Three Gorges Dam, 350 miles east of the quake's epicenter. The team hopes to record aftershocks that will help reveal the structure of the Earth’s crust in this area. Though there is no reported damage to the hydroelectric dam in Three Gorges by the killer earthquake in Sichuan, Zhou said it is imperative to study the safety of the dam during an earthquake. Failure of the dam could result in a disaster of massive proportions , as more than 75 million people live downstream of the dam and the floodplain surrounding the Yangtze River is used for growing much of the country’s food. Zhou said the destructive Sichuan earthquake occurred on the Longmenshan fault. The fault, translated literally as Dragon Gate, has produced many historic earthquakes greater than magnitude 7. The last one occurred in 1933 and killed more than 9,300. The earthquake on May 12 was roughly the same magnitude as the 1906 San Francisco quake that destroyed more than 500 city blocks. “While the Sichuan earthquake is a major human tragedy, the situation could have been much worse considering the city of Chengdu, with a population of 4 million, is just 60 miles away from the epicenter,” said Zhou. “First, Chengdu is on the footwall side of the northeast-trending Longmenshan fault, and that side usually has less damage than the hanging wall side. Second, the northeast-trending fault and northeast rupture direction put most rupture energy away from the city of Chengdu and its population. 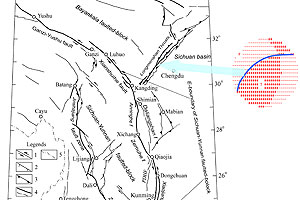 Map of active faults in and surrounding the Sichuan-Yunnan faulted-block of southwestern China. Click to Enlarge.

“However, the region near and to the northeast side of the fault will suffer a lot, though that region has a smaller population density than Chengdu.” Another large earthquake occurred in 1973 on the nearby Xianshuihe fault to the southwest, he said. “In 1986 I spent two months in the field studying that fault with several colleagues. The main driving force of all these earthquakes is the collision of the Indian and Eurasian plates that pushes the mountains against the Sichuan basin.”

Hua-wei Zhou is the Pevehouse Chair and professor of petroleum geophysics and seismology in the Department of Geosciences in the College of Arts and Sciences.