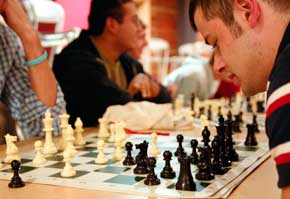 The donation to SPICE will fund scholarships for recruiting chess talent and pay to install three public chess tables on campus.

The gift, given by an anonymous donor, will provide $320,000 in scholarships that Knight Raiders' team coaches Susan Polgar and Paul Truong can use to attract chess players to Lubbock. It builds upon $25,000 already given to Texas Tech’s chess program by the benefactor in 2007 and will provide revenue over five years beginning in the fall.

Additional funds will support the installation of three concrete chess tables between the Student Union Building and Library, to create more exposure and enthusiasm on campus for the game and attract more student players.

SPICE leaders hope the donation will spur further support for Texas Tech’s chess efforts. The university has enjoyed a growing number of inquiries from student chess players since its inception three years ago. Polgar’s hiring in 2007 has broadened the university’s recruitment reach as she garners interest from an international pool of potential chess masters.

“Our benefactor feels that chess is an outstanding surplus preparation for the real world, such as the marketplace," said Haraldur Karlsson, associate professor in geosciences and faculty advisor to the Knight Raiders. “Chess helps nurture and develop critical thinking skills.”

Polgar is a winner of four women’s world chess championships and five Olympic gold medals. At the age of 21, she was the first woman to earn the Grandmaster title.

“The amazing attention SPICE has received from potential students from around the world is testimony to Grandmaster Polgar’s reputation,” said James Brink, associate vice provost of the Heritage Consortium for the Natural and Historic Southwest, who coordinates SPICE efforts.

“Outstanding chess players are most often outstanding students, and this scholarship support will greatly assist us in recruiting a world-class chess team.”

SPICE promotes chess as an academic and outreach tool and provides an almost unprecedented forum for academic research on the game.

The Knight Raiders are Texas Tech's and Lubbock's only chess club. In 2006 the university received the Chess College of the Year award as a result of the club's effort in promoting chess among students, faculty and the Lubbock community.