The students behind the mascot are revealed and recognized at second annual Passing of the Guns ceremony. 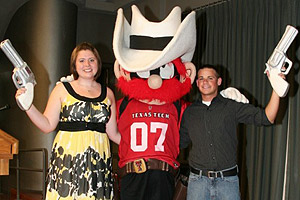 High Rider Abbey Stark and Saddle Tramp Chance Mckee both served as Raider Red for 2007-2008.
Texas Tech University honored the 2007-2008 Raider Red mascots in April at the second annual Passing of the Guns ceremony. For the second year, the outgoing mascots revealed their identities after serving anonymously. Abbey Stark, a senior family and consumer sciences major from Gainesville, and Chance McKee, a senior public relations major from Sulphur Springs, removed their masks as they passed the guns to the next generation of Raider Reds. “Serving as an ambassador for Texas Tech, in and out of the costume, was a unique college experience,” said McKee. “Raider Red is a symbol of pride and tradition – it encompasses everything that is Texas Tech.” Four students currently act as Raider Red at various community events, football, basketball, volleyball, and baseball games. Each year, two new mascots are selected to serve in secrecy. “Nobody knows who you are the whole time,” said Stark. “It’s not something I did for my own personal benefit, but something I did to be part of the university.” 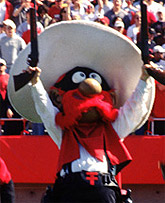 Raider Red was born in 1971, created by the Saddle Tramps from drawings by Dirk West, a Lubbock cartoonist.

In 2005, a new partnership between the Saddle Tramps, High Riders and the Center for Campus Life expanded the role of Raider Red, increasing the number of students serving in the mascot's role from one to four.