Katharine Hayhoe to head U.S. effort to evaluate future climate change impacts on the country's economic sectors and other regions. 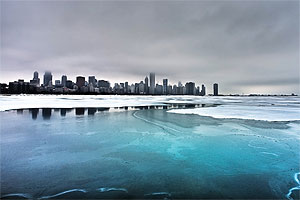 Could Chicago have earlier springs and hotter summers? This question is one of many Katharine Hayhoe and others will look at for the national climate change study.

A prominent climate researcher and professor at the Department of Geosciences has been invited by the White House to serve as a lead author on a national research project to evaluate climate change impacts on the United States.

Katharine Hayhoe has been asked to provide projections of future regional-scale climate changes that are expected during the coming century. Using these projections, other authors of this report will assess the way climate change is likely to impact key economic sectors and regions of the country.

“The report will serve as a great resource for anyone who is interested in finding out how climate change might affect daily life during the next few decades and beyond,” Hayhoe said.

The report, due for release in late 2008, will summarize observed and projected future impacts of climate change on water resources, energy, agriculture, human society and a number of other important aspects of life in the United States.

Drawing on her experience leading climate impact assessments for California, the Northeast and the city of Chicago, Hayhoe will serve as lead author for the Great Plains chapter, which includes Texas.