What It Feels Like... To Serve and Protect the Texas Tech Community

It’s 7:30 p.m. We’re doing 65 mph down Texas Tech Parkway. On our way to an accident with possible injuries. Lights on the cruiser fling red and blue ahead, painting the night a roiling purple. 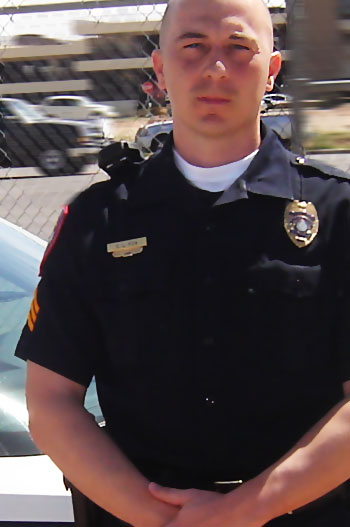 It’s 7:30 p.m. We’re doing 65 mph down Texas Tech Parkway. On our way to an accident with possible injuries. Lights on the cruiser fling red and blue ahead, painting the night a roiling purple.

Silence in the car except for radio squawk. Sergeant Chris Fox, with the Texas Tech Police Department, slows at a red light, checks for coming cars, slams the accelerator again.

This is the third time Fox has flipped his car lights on in less than an hour , but that’s the job...that's his nights. One stop after another approaching open windows in the dark. No telling who’s inside. As the old joke goes, policing is 90 percent boredom and 10 percent adrenaline – or "sheer terror," as Fox quips.

I used to carry a back-up gun on me, but I don't anymore – for convenience, more than anything. I didn’t like having that extra weight. Don’t want the risk of getting into a scuffle and having the gun fall out. I always wear my vest, though, you never know what’s going to come up.

Some crazy stuff happens on campus. We’ve had two officers assaulted in the past six months. One got into a scuffle over by Chitwood/Weymouth; drunk guy in the parking lot damaging vehicles.

The last major incident I had, there was a carjacking right in front of the Health Sciences Center. This guy followed another guy through the parking lot, walked up to him with a .45. Took his vehicle.

We found the guy out by … just a second …

Fox shifts lanes, flips on his lights, cuts a turn from 4th Street onto Texas Tech Parkway in pursuit of a vehicle. The engine growls as Fox urges speed out of the cruiser in pursuit of a driver failed to yield right-of-way at an intersection.

Right now I’m working evening shifts – 2 to 10. We might have an accident or two, occasionally an arrest. The call volume varies from day to day.

We’re busier at night. Midnight shifts especially. There are a lot of bar specials on Thursday and Friday nights – students going out, getting ready for the weekend and enjoying themselves, taking a break from classes. Those nights are the busiest.

But we stay pretty busy just with traffic. The peak time for that is when people go to work at 8 a.m., same thing when people go home at 5 p.m. That’s when most of the accidents happen.

When I drive, I try not to get too complacent, as if I’m a taxi driver going from one location to the next. I’m looking around, and not just for traffic violations: a headlight out, erratic driving. I scan around. You never know what you’re going to see.

Driving through parking lots, you really want to look and see if there’s anything out of place, any kind of suspicious behavior. If something doesn’t sit right with you, you drive up and check it out.

Lately, we’ve had quite a few burglaries on day shift. That’s pretty frustrating, because we might have five or six officers patrolling campus, but the burglars know who we are. We’re in marked units. They’ll sit and wait for us to leave and then break into cars, so we’ve been putting a lot of officers in unmarked units trying to see if we can put a stop to that.

Unfortunately, students make pretty easy targets for people. There are a lot of really nice vehicles on campus. Thousands of cars in parking lots and people keeping to themselves is a recipe for break-ins. I think officer visibility is huge. 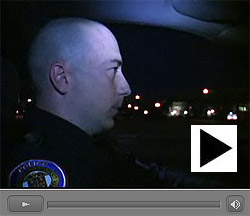 Better than an episode of Cops! Ride along with Sergeant Fox.

On Getting Stopped Himself

If I ever get stopped for anything, I hope I get stopped by somebody like me, because I’m actually pretty lenient on traffic. I feel bad writing people tickets. If I can tell that stopping a driver will lead to voluntary compliance, then … Hold on... The car ahead of us is driving a bit erratically. Swerves over a yellow line. Fox’s lights come on yet again.