What It Feels Like... To Ride Hell-Bent for Leather Across a Football Field For the First Time

As the 2007-08 Masked Rider, Kevin Burns leads the Red Raiders onto the football field during home games and celebrates touchdowns with a mad dash down the sidelines. He made his first run during Texas Tech’s first home game of the 2007 season against the University of Texas at El Paso. 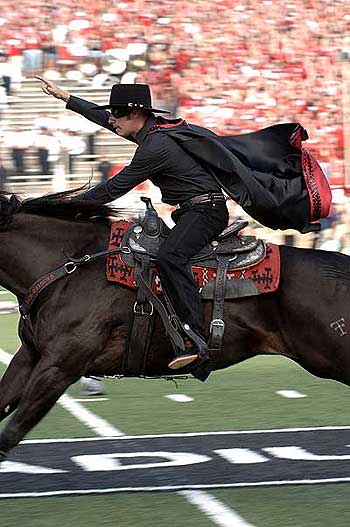 As the 2007-08 Masked Rider, Kevin Burns leads the Red Raiders onto the football field during home games and celebrates touchdowns with a mad dash down the sidelines.  He made his first run during Texas Tech’s first home game of the 2007 season against the University of Texas at El Paso.

I expected it to be loud, but when I looked up into the stands and saw all the people, I knew it was going to be an incredible experience. Since it was my first run, I was nervous. There is so much activity on the field that you really have to pay attention to make sure nothing goes wrong. That’s where my focus was – on Midnight Matador.

The best moment for me was looking up at the video board above the end zone just before the game started. They play a cartoon of the Masked Rider to get people pumped up. I looked up and suddenly it hit me:  I’m the Masked Rider.

It’s funny. The horse doesn’t get very excited about anything at all. But when we were standing there in the stadium, the Saddle Tramps parted to make the hole for us to run through and the band started playing Ride, Raider Ride, his ears perked up. I could feel his heart beating through the saddle. He knew it was about time to run. I had to concentrate on holding him back until the right moment to go.

Dr. (Sam) Jackson is in charge of deciding when we run. We run him at different times during Ride, Raider, Ride – sometimes it’s a bit earlier and sometimes it’s later in the song. It’s crazy how smart he is about it, so we try to make sure he’s keeping his mind on the rider rather than when to run.

Dr. Jackson told me to just take it easy on the first run, but there wasn’t any taking it easy. The horse wears rubber pads over his hooves and it’s not unusual to lose one or two during the run. I think I was the first rider to lose all four. I heard later that one of them almost hit the band director.

The run is so fast I don’t really know how to describe it. It’s over in a split second. But for that one second, every eye in the stadium was on me and I wanted to give the spectators the best show possible.

It was a cool experience – kind of my ten minutes of fame.

After the first run I could relax and enjoy myself more, just have fun with it. I circled the stadium and got a chance to shake hands and meet people. It was fun seeing how excited everyone was to have me there.