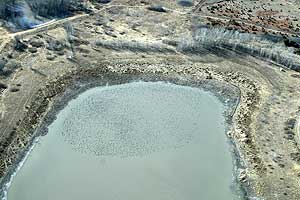 Thousands of migrating ducks huddle on an isolated playa near Spearman in the Texas panhandle. Researchers estimate that some 2 million waterfowl winter on High Plains playas. Click to enlarge.
A proposal by Texas Tech University researchers for a wetland management district to protect playa lakes is awaiting approval from the U. S. Fish and Wildlife Service. In addition, Texas Tech has developed an education model and curricula to incorporate information about playas into elementary and junior high classes. These moves by university ecology scientists are intended to help clarify the big environmental picture about protecting playas – those small, round depressions dotting the West Texas landscape that remain dry throughout much of the year and emerge as recognizable wetlands when filled with rainwater. “If things continue and no changes are made from both a legal and an ethical point of view, we’re going to have a collapse in the playa system relatively soon,” said David Haukos, an adjunct wildlife ecology professor in the Department of Natural Resources Management. “If that happens, then we’ll have unforeseen impacts on society both in terms of water quality and quantity, but also on wildlife and plants in this area.” There are plenty of playas on the Texas High Plains and in Eastern New Mexico – approximately 22,000. In fact, it’s the largest concentration in the world. Playas act as natural water storage sites, providing irrigation water and seasonally recharging the Ogallala, the nation’s largest aquifer. The 800-mile aquifer stretches from Texas to South Dakota. Estimates suggest that some 2 million waterfowl winter on High Plains playas, making it the second largest wintering site in interior North America for ducks and geese. Wildlife supported by playa habitats has spawned a thriving lease-hunting industry, as well as being a popular attraction for money-spending birdwatchers and nature photographers. Across the globe, playas are gaining recognition as valuable ecosystems, Haukos said. But unfortunately at the local level they’re too often considered unattractive nuisances or wastelands. The problem for landowners is that they’re not permanently one way or the other; full or empty. In their typical annual cycle, playas experience periodic flooding and drying. And while these water level fluctuations promote nutrient cycling and biological productivity, the researchers note that landowners frequently prefer less change. “We need to preserve that process of wetting and drying,” said Haukos, who also serves as a migratory bird specialist with the U.S. Fish and Wildlife Service. “If we make a playa area wet or dry all the time, then we’ve killed it.” Individually playas are also threatened by potential fertilizer and pesticide runoff, as well as contaminated water from oil fields or waste matter from livestock operations. However, the common threat is sedimentation from erosion of cultivated watersheds surrounding playas. Sedimentation fills playas, which reduces the volume and duration that water can be held in each playa.

Can They Save the Ogallala? (And the Farmer?)Common Flora of the Playa Lakes by David A. Haukos The Life of a Playa Story produced by the Office of Communications and Marketing, (806) 742-2136. Web layout by Kristina Butler. 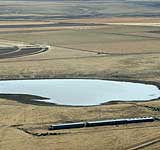 The Texas High Plains and Eastern New Mexico has the largest concentration of playas in the world – approximately 22,000. 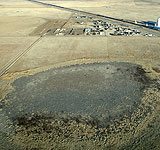 The tiny farming community of Dawn, some 25 miles southwest of Amarillo, is dwarfed by a large 80-acre playa.