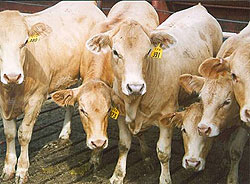 Biomass energy has several advantages over wind and solar energy – mainly that it can be designed to be available 24/7, and not site-specific or impacted by weather.
If all of the cattle, swine and poultry waste across the United States could be collected and converted to electricity, the resulting energy could produce 80 percent of the nation’s current electrical power needs, while also generating marketable high-end plants and extracts. And the system works, at least on a smaller scale, according to research by civil engineering professor, Clifford Fedler. Fedler believes the country is largely ignoring an unlimited source of renewable energy – animal waste and other biomass – which is nothing more than any dry organic material like yard clippings, paper, residual material from cotton fields or other agricultural leftovers.

Fedler funded the research with a grant from the State Energy Conservation Office. He recently received a second grant from the organization to perform an economic analysis of his biomass recycling system. Other departments across campus are assisting in the analysis; agricultural economics to assess marketing costs, and industrial engineering to assess the engineering economics of the system. “The U.S. Department of Agriculture put out a report two years ago that says in the future, there will be 1.2 billion tons of biomass available for energy production,” Fedler said. “What I have found is that if animal waste is recycled into biomass (dry material) rather than using fresh water sources, we have the potential to produce more than 4 billion tons annually, which is sufficient to produce nearly 80 percent of the nation’s current electrical energy usage.” In addition, the heat produced in the conversion process could be used in ancillary businesses such as greenhouse vegetable systems for year-round production, Fedler said. Biomass energy has several advantages over wind and solar energy – mainly that it can be designed to be available 24/7, whereas wind and solar energy are site specific and rely heavily on climatic conditions and time availability.

By integrating various technologies together, such as water recycling with fish production, not only can additional biomass be generated, but negatively impacted water can be remediated, resulting in a cleaner environment. Additionally, integrated systems have the potential to produce valuable byproducts that result in new jobs and sustainable economic growth, particularly in rural communities. 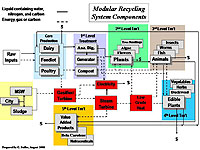 Flowchart of Fedler's Modular Recycling System. Click to enlarge.
Fedler’s integrated modular production system would operate differently in various parts of the country, depending on the resources available at a given locale. In an arid or semi-arid region like West Texas, a hypothetical integrated recycling system would operate as follows:

Story produced by the Office of Communications and Marketing, (806) 742-2136. Web layout by Kristina Butler.

Clifford Fedler is a professor in the Department of Civil Engineering in the College of Engineering. He also serves as associate dean of the Graduate School.