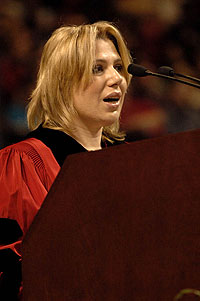 Susan Polgar is the only World Champion, male or female, to win the triple-crown in chess. Download her commencement address.
Texas Tech University, known athletically as the home of Bobby Knight and Mike Leach's Air Raid football offense, could soon be equally feared for its wicked endgame. The university announced that it will establish the Susan Polgar Institute for Chess Excellence (SPICE) and hire chess powerhouses Susan Polgar and Paul Truong to head the program. Polgar, four-time women's world chess champion and five-time Olympic chess champion, will serve as director of SPICE and coach of the Knight Raiders chess team. Truong, 11-time national champion, will be the institute's business manager and assistant coach. "We are obviously very excited about SPICE and the opportunities it will provide," said Polgar. "We plan to build one of the world's premier centers for chess research and outreach while solidifying Texas Tech as a national chess contender."

The institute will include academic and outreach components and provide an almost unprecedented forum for academic research on the game. Situated under the Office of the Provost, SPICE will allow researchers across disciplines to study chess from angles as diverse as artificial intelligence, cognition and women's studies. Research could probe the influence of chess on learning, for example, or tap the university's High Performance Computing Center to create sophisticated computer programs. Institute developers also intend to use SPICE as a way to promote and support collegiate-level competitive chess and to promote chess outreach to players of all ages. Recruiting chess champions will benefit the university academically, said Jim Brink, senior vice provost for academic affairs, noting that chess requires a combination of intellect, spatial thinking and other skills that often translate into classroom success. 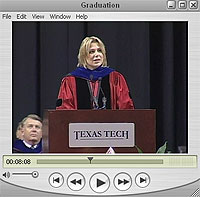 Texas Tech has established itself as an emerging chess presence in just a few short years. The Knight Raiders club, established in 2003, now claims more than 100 members. This includes an international slate of star talent wooed to checkmate for Texas Tech. In 2006, the university was named Chess College of the Year by the United States Chess Federation - the U.S. governing body - for its scholarship program and emphasis on female recruitment. Creating an institute devoted to chess and hiring two of the game's top personalities will increase Tech's profile in the chess scene, said Haraldur Karlsson, the current team coach and mentor who helped found the Knight Raiders and was a key player in building Texas Tech's relationship with Polgar and Truong. "This is a seismic event in the chess world," Karlsson said. "This institute is a unique opportunity to apply the resources of a major research university to promoting and understanding chess." 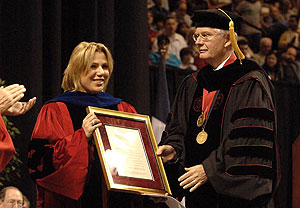 Polgar received an honorary doctoral degree from President Jon Whitmore during commencement ceremonies.
Polgar has visited Lubbock in the past to meet with Texas Tech officials and the Ramirez Charter School Rooks chess team, an outreach program of the Knight Raiders. She spoke at Texas Tech's undergraduate commencement ceremonies Saturday, where the institute was announced. During the first commencement ceremony, she received an honorary doctoral degree of human letters. "Ms. Polgar is a good friend of Texas Tech and our Knights Raiders chess team," said President Jon Whitmore during the commencement ceremony. "She is also one of the very best chess players in the world." Polgar has a lengthy list of credentials, including being the only person - male or female - to win chess' Triple Crown, comprised of Rapid, Blitz and Classical world championships. She currently is the top-ranked player in the United States and, at the age of 15, was the first woman to earn the Grandmaster title. Truong is an eleven-time national champion and was the captain and business manager of the 2004 U.S. Women's Olympiad Team. Story produced by the Office of Communications and Marketing, 806-742-2136. Photography by Artie Limmer Web layout by Gretchen Pressley

About the Chess Queen

Polgar was raised in Budapest, Hungary and now lives in Queens, New York. She is a Hungarian - American chess player, and one of the strongest female players in history.

Polgar kicked off her successful chess career very early by winning the World Chess Championship for Girls under 16 at the age of 12.

At the age of 16, Polgar ripped through the gender barrier by becoming the first woman in history to qualify for the Men’s World Chess Championship. However, because she was female, she was not allowed to play. Because of Polgar, the world chess federation eventually had to change their policy to admit women players.

Polgar again broke all the gender rules by becoming the first woman to earn the men's Grandmaster title in January 1991. She was followed closely by her younger sister Judit, who earned the title of Grandmaster later in December 1991.