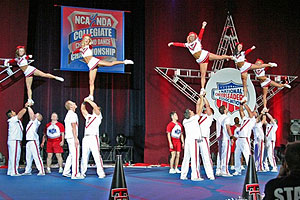 The Texas Tech cheerleaders practice their routine on the competition stage.Click to enlarge

Women tumble through the air, spinning and twirling high above the cheering crowd before they are caught by the men below. These bold men and women are members of the Texas Tech cheerleading team.

The co-ed squad of 20 cheerleaders competed with guest Raider Red to earn the team’s highest finish since placing fifth in 2003.

Stephanie Rhode, assistant director of the Center for Campus Life, said reaching the NCA finals after a full season of cheering is a great reward for the team.

“The squad prepares for football, volleyball, basketball and many other spirit events held around campus,” Rhode said. “In addition, they must also practice skills and routines used in competition – it’s not easy.”

The cheerleading team and Raider Red pose with their trophy in Daytona Beach, Florida.

The competition included 15 teams from various Division I-A schools including Clemson, University of North Carolina, Oklahoma State University and University of Louisville – the eventual champion. Competition invitations were distributed based on video applications or exemplary performance at an NCA cheerleading camp; Texas Tech was accepted through video submission.

The squad had been working on pieces of their routine since before homecoming, said Joshua Anderson, the head coach of the team.

“They actually did little performances and bits of their routine at the basketball games and at homecoming,” Anderson said. “But we didn’t put it all together until just two weeks before the competition.”

A series of unfortunate accidents delayed practices, Anderson said. One member of the team was in a motorcycle accident and another had a knee injury that prevented the team from completing a run-through of their program.

However, the team didn't let a few injuries slow them down. Since the competition was held outside, they began dragging their mats out to the tennis courts and practicing in the sun, Anderson said. 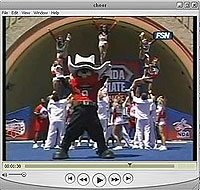 “The skill level of this team is outstanding,” said Anderson, who cheered during his college years at Illinois State and won second place in 2002. “There is so much tumbling and so many stunts involved.”

Anderson said he is excited about placing fifth because it will direct more of a spotlight on the cheerleading team at Texas Tech.

“It will help me recruit new students to the team,” Anderson said. " Placing in the national competition also creates more team cohesiveness. It keeps them on task and strengthens the pride they have in the team. The little things they do mean a lot more to them now.”

Story produced by the Office of Communications and Marketing, 806-742-2136. Web layout by Gretchen Pressley.