Alumni Transform Devastating Diagnosis Into Lives of Helping Others 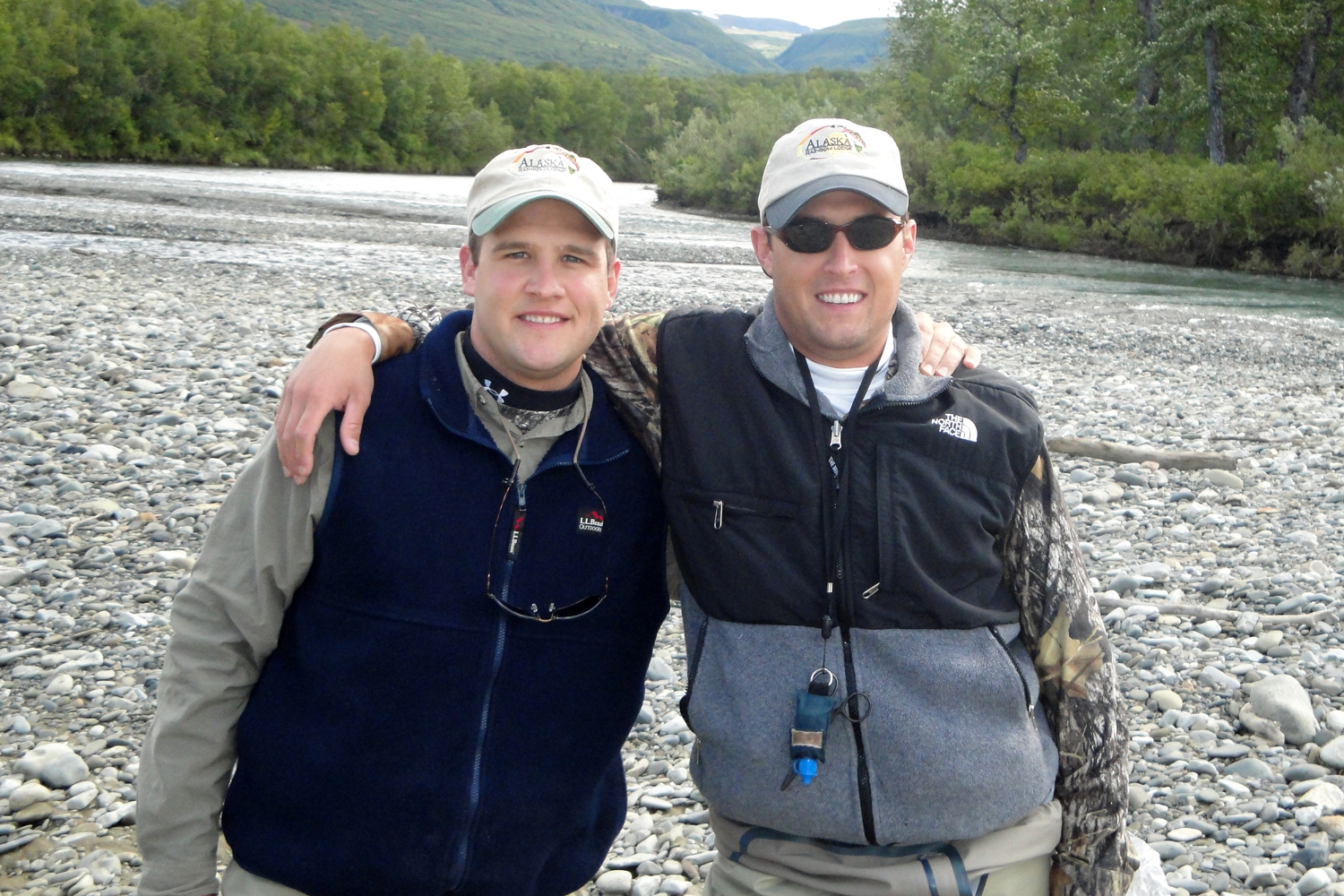 After a Texas Tech sophomore learned he had multiple sclerosis, he and his brother started a team and a company dedicated to giving back.

Hunter Jaggard vividly remembers the phone call that changed the direction of his life.

It was 2002. He had graduated from Texas Tech University in business, communications and fine arts a year earlier and was working for Dell Computers in Austin. On the other end of the phone – six hours away – was his younger brother, Griff, a Texas Tech sophomore.

“I remember him saying, ‘Gosh, Hunter, I'm in class and something's wrong. I can't hold my pencil, my hand is numb and I'm having a lot of trouble. I don't know what's going on,'” Hunter recalled. “I immediately said, ‘Just hold on; I'm coming up.'

“We took him to a doctor there in Lubbock and really did not get a firm direction on what was going on. We decided to go home to Houston and see a specialist with the Baylor College of Medicine. Two months later, we found out he was diagnosed with multiple sclerosis (MS).”

Griff says that at age 22, the news initially was tough to swallow.

“There are two ways you can take that,” he said. “You can feel sorry for yourself, or you can take action and do something about it. So that's what we decided to do.”

Together, the brothers formed a nonprofit team called the Carney Men to participate in the National MS Society's BP MS 150 bicycle ride. The event, which travels from Houston to Austin each April, raises money for research toward a cure for multiple sclerosis.

The Carney Men's inaugural ride in 2004 – just a few weeks before Griff graduated from Texas Tech – brought together 14 riders and raised $6,500.

“Over 13 years, we raised over $1 million,” Griff said. “We're the largest noncorporate team in the country ever to do that, and we gave every single dollar back to MS.”

By 2010, the Houston-based team was so successful that Hunter and Griff decided to branch out. They recruited riders in Lubbock and started the Apache Cactus & Crude ride, which travels from Midland to Lubbock.

Even though Griff's diagnosis was the impetus to start the teams, the members themselves have served as continual inspiration through the years.

“Not only does Griff have it, one-third of our team has a friend or family member with the disease,” Hunter said. “One thing leads to another, and you hear their story, and it spurs you on for sure.”

For Griff, Carney Men has been a way to take one of the worst moments of his life and transform it into a way to help others. He's now healthy, thanks to a daily pill that keeps the disease neutral and allows him to maintain a normal lifestyle. He continues to ride the MS 150 with the team every year.

“The diagnosis was definitely an impact on my life,” Griff said. “I didn't see it coming, of course, but when you're diagnosed with something like that, you see others who've had disease for years and years before you, you see that some aren't as well off as you. I just wanted to do everything I could, since I am healthy and I did catch it early, to help other people out. In a lot of ways, it's taught me there's always going to be bumps in the road in anyone's life, but you can never quit. Just keep going and going, because you know the answer if you quit.”

Their fundraising work through the Carney Men, however, is not the only way the Jaggard brothers are helping those around them. They've also started a business based on that philosophy.

After Griff graduated with a degree in corporate communications, the brothers each got married – Griff to Jessica and Hunter to Brittney, both also 2004 Texas Tech graduates – and moved to Katy. They worked in commercial real estate in Houston, but one of their main ways to get away from the hustle and bustle was to get out into nature. They'd grown up hunting and fishing, so it was just natural to continue that as adults.

Before one of their regular hunting trips eight years ago, Hunter's father-in-law, a farmer, gave the brothers a plow disc – a shallow, metal bowl that tills soil when attached to a plow. But that wasn't its only use.

“People had cooked on them, traditionally, and just set them on the coals,” Hunter said. “Griff and I were out hunting and using it, and realized, ‘This thing really cooks awesome, but it's not really portable, it's hard to use.' We thought, ‘Why is nobody making something like this, or a product to cook on that was portable?' For all this great stuff that exists to cook in the backyard, why has no one effectively branded portable cooking products for the outdoorsman? Things that were easy to use, that worked in the wind, that could be out at a Texas Tech tailgate all season and never break down, that wouldn't rust – stuff that really anybody could use.”

And that's when they looked at one another and said, “You know, we're pretty good at building stuff.”

So they started FireDisc Cookers – Griff as president and Hunter as CEO – working in their spare time to design the product and make it marketable. It wasn't easy to launch a company, of course. They had to work with multiple welding shops and some of their inventory was stolen along the way, but they kept going.

“Really, it was a pure lesson not to quit,” said Hunter. “We saw the niche and persevered through all that, and we ended up getting so busy as a side business that we took it full time. Now we are sitting in 700 stores in 44 states. We sell to Home Depot, Ace Hardware, Cabela's and a number of other retailers around the country.”

Expanding upon the FireDisc, they have since developed other niche products, including cookware and a wind helmet that works with the FireDisc, allowing users to cook safely in 30-40 mph wind. They were recently ranked No. 374 in Inc. Magazine's list of the top 500 fastest-growing companies in the United States.

“Every single product we come out with seeks to solve a problem and be innovative, and allows our customers to cook more and feed their families,” Hunter said.

But it's not just families who benefit from their products.

“During Hurricane Harvey down in Houston, people were sending us pictures of the FireDisc in survival situations,” Hunter added. “They couldn't get charcoal and their stoves didn't work, but they were putting canned food in there; they were boiling their babies' water.

“We were called by the National Guard to cook for them because they needed to feed a lot of people fast. On two FireDiscs, they made 3,000 breakfast tacos for first responders and flew them out on Apache helicopters.”

“Since the MS 150, our company motto is to always give back,” Hunter said. “Griff and I made a pact as brothers – not just from what he went through, but also what we saw people with MS go through over the years.

“We want to make an impact, not only in business but also doing something good.”