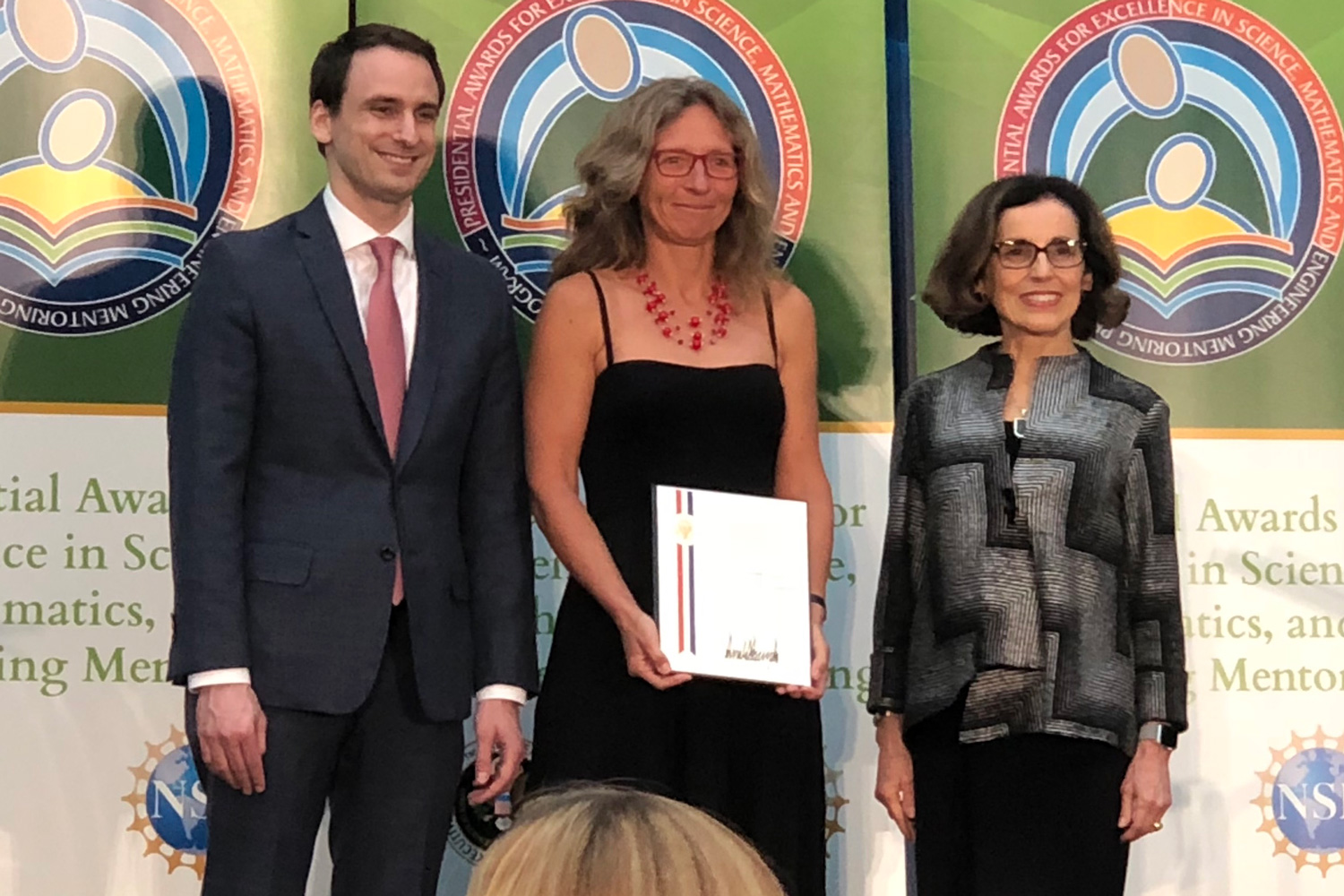 Tanja Karp, an associate professor in Texas Tech University's Department of Electrical & Computer Engineering in the Edward E. Whitacre Jr. College of Engineering, has made it her personal mission to mentor young students throughout her career, a mission that recently was recognized on a presidential level.

Karp was one of 41 individuals or organizations awarded the Presidential Award for Excellence in Science, Mathematics & Engineering Mentoring (PAESMEM). Administered by the National Science Foundation (NSF) on behalf of the White House Office of Science and Technology Policy, the PAESMEM is the highest honor bestowed upon mentors who work to expand talent in the science, technology, engineering and mathematics (STEM) fields.

“Someone else recognizing and believing I'm a valid candidate for this award, it kind of makes you proud because it shows you there's some external effect on being a mentor,” Karp said. “Receiving the award after such a long time came as a surprise. The whole experience has been humbling.”

The ceremony was held at the National Portrait Gallery in Washington, D.C., where Karp met fellow awardees as well as France A. Córdova, NSF director, and Michael Kratsios, Deputy U.S. Chief Technology Officer and Deputy Assistant to the President in the White House Office of Science and Technology Policy.

Al Sacco Jr., dean of the Whitacre College of Engineering, nominated Karp and noted the many positive attributes she brings to the university and engineering.

“Tanja is an outstanding university citizen, always available to help students, faculty and staff alike, a well-cited researcher and a consummate educator,” Sacco said. “What makes her truly unique is she is the college's strongest advocate for an integrated approach to undergraduate and K-8 STEM education and combines this with hands-on engineering to bring the fields of science and engineering alive. She uses a service-learning project in her Introduction to Engineering class to expose K-8 students to engineering problem solving and design strategies using Lego robotics. The service-learning course supports her annual Get Excited About Robotics (GEAR) challenge.”

In 2005, Karp and colleague Richard Gale, a professor of electrical and computer engineering, applied for a grant from the Texas Workforce Development Program aimed at helping high school and engineering students be better prepared to succeed in engineering.

“We came up with the idea to create a robotics program because robotics is a hands-on application of STEM,” Karp said. “There's programming, but there's also problem solving involved. It creates excitement. It seemed like a good idea at the time, and we were awarded a three-year grant. That's how the GEAR program got started at Texas Tech.”

GEAR is a pre-existing, nonprofit volunteer organization created to foster interest in STEM among today's youth and provide game rules for the annual competition, with instructions on how to build game tables and where to purchase game elements. Texas Tech is the only institution that offers the competition in the South Plains. GEAR provides an exciting, hands-on Lego robotics challenge for elementary and middle school students with no participation fee.

With the grant, GEAR officially launched at Texas Tech in 2006 as a pilot project with one school and 25-30 students from Harwell Elementary School competing. Now in its 12th year, the program has grown to three competition sites at Texas Tech, Frenship Independent School District in Wolfforth and Alamo Junior High in Midland to accommodate 1,785 students who participated in 2018.

“There were 374 teams this year,” Karp said. “Most of them were second-through-eighth graders; 36 percent were girls and 45 percent were historically underserved or underrepresented populations. Sixty-nine percent of the schools were Title I schools with a large percentage of students from a low socioeconomic background.”

Public schools aren't the only organizations allowed to participate in the GEAR program. It's also open to 4-H clubs, Boys & Girls Clubs and the Boy Scouts and Girl Scouts, homeschoolers and private schools, to name a few.

“I'm really big on inclusion, so everybody gets this opportunity to learn early on what STEM careers could look like and also try them out and see if it's something for them,” Karp said.

There are two categories in the competition: elementary school (K-5) and middle school (grades 6-8). Each school can enter up to eight teams. The top 24 teams advance to playoffs at Texas Tech's Student Union Building. John Opperman, former interim president of Texas Tech and the vice chancellor for Outreach and Engagement, made a surprise appearance at this year's competition.

“We had John Opperman spontaneously show up this year, so that was great,” Karp said. “He said a few words and was impressed. It was exciting.”

As the GEAR competition grows on the South Plains every year, Karp's desire is to see it continue to reach kids who otherwise wouldn't have the chance to experience something like it.

“What's important for me is offering it to rural communities in the South Plains or the Panhandle or even south of the Permian Basin and the whole country, because they don't have that many opportunities,” she said. “There are other Lego robotics competitions in metropolitan areas, so there are enough opportunities out there, but working with the rural areas and offering something particularly for the kids who may not be that interested in athletics, that's my main focus.”

Students also can participate online through Texas Tech's Virtual GEAR competition, which runs parallel to the university's on-site competition, giving international students a chance to compete without the stress of travel expenses and jetlag.

Karp is no stranger to mentorship. She has been the faculty adviser for Texas Tech's Society of Women Engineers student chapter for the past eight years and also is involved in the Service Learning Faculty Fellows (SLFF) program through the university's Teaching, Learning & Professional Development Center.

“The SLFF focuses on promoting service learning pedagogy where students actually work on a service component or service project that's incorporated into the curriculum,” Karp said. “It's a nice interdisciplinary group and provides feedback and a how-to guide for faculty members who haven't done it before. It's a steep learning curve, and whenever you can make that steep learning curve smoother to keep them from reinventing the wheel and spending a lot of time on things others have figured out, it is a great feeling.”

What Karp enjoys most about being a mentor is seeing people thrive.

“You don't really become a mentor as a career-building component for yourself,” she said. “You just help other people be successful. Whenever a student who applies for the Fulbright exchange program actually gets a Fulbright award, and I've been part of reviewing the proposal or providing a little bit of input, seeing those successes is the most rewarding part for me.”

As for being awarded the PAESMEM, Karp has nothing but thanks for all those teachers who work hard to make a difference in the lives of others and who help make GEAR a success.

“I'd like to thank Dean Sacco for nominating me and, more importantly, I'd like to thank all the teachers and robotics coaches because they are doing an amazing job,” she said. “Nearly all of them work outside their normal hours with these young, bright students, conveying the enthusiasm and offering the opportunity to participate in GEAR. Without them, the whole program wouldn't happen.”