According to Kiplinger, Texas Tech ranked 20th for best value for less than $30,000 a year. 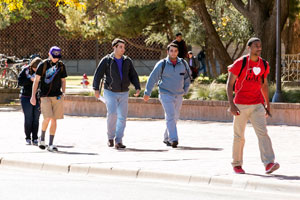 Texas Tech University is ranked 20th on “Kiplinger's Personal Finance” list of best college values under $30,000 a year. The magazine listed the university's in-state tuition and fees at $9,308 per academic year. It is the only Texas college on the list.

Texas Tech is also ranked 90th in Kiplinger's list of best values in public colleges, marking the third year it has been in the top 100.

“As families continue to face rising college costs nationally, I'm proud of the efficiencies we've created to help keep costs as low as possible, while also maintaining and providing a high quality education,” Texas Tech President M. Duane Nellis said. “Our faculty, staff and administration all work diligently to ensure those who want an education have the very best opportunity to pursue one.”

Kiplinger looks at cost criteria including low sticker prices, abundant financial aid and low average debt at graduation. Quality is assessed according to a number of measurable standards, including the admission rate, the percentage of students who return for their sophomore year, the student-faculty ratio and the four-year graduation rate.

“We use four-year graduation rates because we think that's more relevant in terms of cost,” said Sandra Block, a senior associate editor at “Kiplinger Personal Finance.” “The sooner you get out, the less you pay, the less you borrow.”

The annual public and private school rankings appear in Kiplinger'sFebruary 2015 issue — on newsstands in early January — and online now. Web visitors will find special features, including a tool that lets readers sort by in-state and out-of-state cost, average debt at graduation, and admission rate; a slide show of the top 10 schools; archives of previous years' rankings and an FAQ about the ranking methodology.