(VIDEO) Rachel McLelland will serve as the 54th Masked Rider for the upcoming academic year. 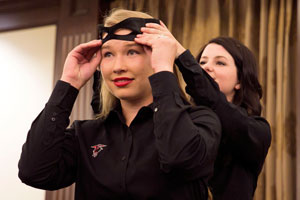 McLelland, a junior from Tijeras, New Mexico, is a pre-med student also majoring in anthropology. She loves all things horses and started riding when she was 3 years old. In the coming year, she will promote the spirit of Texas Tech at athletic events and other school and civic appearances while representing herself as an ambassador for the university and sharing her love for riding and Texas Tech.

“I am so honored and humbled to represent Texas Tech in the most exciting way possible,” McLelland said. “The Masked Rider is the most recognizable symbol of Texas Tech and has a long, illustrious history. I hope to carry on the legacy through hard work and commitment, representing not only the Masked Rider, but also Texas Tech and all they stand for.”

From novice to the Grand Prix

McLelland's love for horses came at an early age. She learned how to ride as a toddler, following in the footsteps of her mom, who grew up with horses as well.

She recalls when her parents, Scot and Betsy McLelland, bought her first horse, named Flower Rose. McLelland always took the reins when it came to caring for her horses. When she had Flower Rose, she was out in the field every day with her. She fed the horse, gave her treats and groomed her; she was proud to call Flower Rose her own. 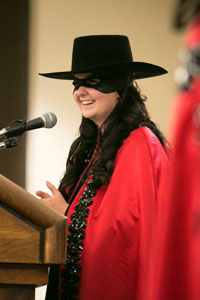 At the age of 5, McLelland began showing horses and competed in English hunter/jumper competitions. By the end of high school, she was competing nationally at the Grand Prix level for equine jumping.

Since she started competing, she has won numerous awards for individual hunter/jumper classes, reserve and show championships across the Southwest and awards for being the top rider in her division in New Mexico and in other states, including Utah, Colorado and Arizona.

Now at Texas Tech, McLelland is no stranger to the Masked Rider family. During the 2014-2015 season, she was selected as an assistant for the 53rd rider, Mackenzie White, which McLelland said it gave her invaluable experience in learning about Texas Tech, the Masked Rider program and what it really takes to be the most iconic symbol and mascot for the university.

During her college career, McLelland has been involved with several organizations on campus. She's involved with the Pre-Med Society, Health Occupations Students of America, student ambassador for Texas Tech's College of Arts and Sciences, Wreckin' Crew (a spirit program) and Sigma Phi Lambda.

With an exciting year ahead of her, McLelland says she is excited for what's to come while serving as the 2015-2016 Masked Rider. 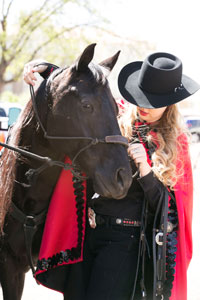 After her term as a Texas Tech mascot, McLelland plans to study abroad in London for a medical internship in the summer of 2016 and attend medical school for orthopedic surgery after she graduates in May 2017.

White, the 2014-2015 Masked Rider, logged 180 appearances at athletic events, rodeos, school and civic events, traveling 21,000 miles total – the same amount of miles logged by the 2013-2014 Masked Rider Corey Waggoner, who broke the record for the most appearances and miles recorded.

White says being the Masked Rider was an incredible experience.

“Spending a year as the Masked Rider has been a life-changing experience for me,” she said. “I've grown in so many aspects and I see things a little differently now. Not only have I grown as a horse person, but I have a new love for meeting new people and promoting Texas Tech. While I knew being an ambassador was part of the job beforehand, I've learned to embody Texas Tech and reach out to each and every person I meet, inviting him or her to be a part of the Texas Tech family.”

Her favorite part of being the Masked Rider was seeing people's faces light up when they realized she was the Texas Tech mascot.

“The look on kids' faces when they realized I was riding the ‘real' Texas Tech horse encompassed every bit of excitement I feel when running down the field,” White said. “Their enthusiasm and love for Texas Tech is the same as that which drew me to become a student at Texas Tech, and later on, an ambassador for the university.”

A senior from Marble Falls majoring in agricultural and applied economics with minors in Arabic, political science and economics, White plans to continue her ambassadorship for Texas Tech by completing a congressional internship in Washington, D.C.

After graduating with her master's degree in 2017, she plans to attend law school and pursue a career in agricultural law.

“This is something I will carry with me for the rest of my life,” White said. “I am forever grateful to Texas Tech and the Masked Rider program for allowing me the honor of serving as the 53rd Masked Rider. I am entirely thankful for each ride on Fearless Champion, each person I met and each ‘Guns Up!' that came my way.”