Face-to-Screen: Graduate Students Use Tablets to Connect with K-12 Students 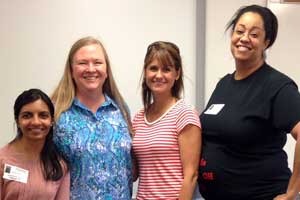 Every middle school teacher could use another adult in the classroom, answering questions, explaining difficult concepts and keeping an eye on 30 students.

Abilene Wylie Middle School teacher Robin Hart has had a few extra adults in her classroom – or at least their heads. A unique grant Texas Tech University received allowed Texas Tech graduate students to partner with area math and science teachers to create a curriculum and help in their classrooms.

Hart, also a doctoral student in curriculum and instruction in the College of Education, said handing her students a tablet so they can interact with STEM graduate students is increasing her effectiveness in the classroom as well as giving her students an opportunity to talk with other experts.

“Students will usually talk to a graduate student one-on-one,” Hart said. “They just kind of pass the head around.”

This tutoring is part of a math-engineering-science bridge program started in 2008 with a National Science Foundation grant. The purpose of the Graduate STEM Fellows in K-12 Education (GK-12) grant, chemistry professor Dominick Casadonte said, is to bridge the gap between math and science, Texas Tech and surrounding schools, and education, engineering and science programs at Texas Tech. The program started with high school classes in Lubbock and expanded throughout the South Plains and into Hart's middle school class.

“She was doing sort of exciting things,” said Texas Tech mathematics professor Jerry Dwyer, who administered a second grant that funded Hart's program. “She was getting her students interested in science. They were inquiring about stuff, they were exploring, they were really doing science, and to me it's difficult to find a teacher and a group of students who are all interested in actually doing that sort of thing.”

Hart knows introducing technology can be hard for teachers because teachers don't want apps to do the teaching and they worry having that technology won't actually help students learn. Putting another teacher on the other end has helped technology become part of the classroom.

Last year she used Google Hangout primarily in her math and science competition class; this year it's in her after-school science club.

Last year three to four mornings a week her class would connect with master's student in electrical engineering Dipika Patel or chemistry doctoral student Deóis Ua Cearnaigh (the students called him Doc). Students had Google Hangout open on one tablet and used other tablets to open Twiddla, an online whiteboard. The graduate student would walk the middle-schoolers through a math problem or scientific equation, with the students seeing everything the graduate student did. Hart's sixth-grade students could get into advanced math and science topics or learn how to put together an experiment of the presentation. 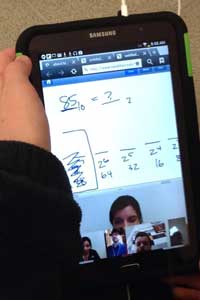 “It worked great because I had a class of 32 students, so I could send a small group in the hall with tablets,” Hart said. “They could spend a lot of time just focusing on whatever it was they were having trouble with.”

This year, Ua Cearnaigh is using Google Hangout with Hart's science club, which is doing a composting project. In this case, she basically gets another teacher.

“He just helps divide that workload for me because it's really hard to tell that many students how to design their experiment or what they need to pay attention to and how you can do that experiment,” Hart said. “It's good to have another person.”

Ua Cearnaigh, who did online tutoring for a number of years before starting with Hart's class, said the process didn't always go as smoothly.

“At first it was really hard,” he said. “I think it was hard at least partly because we hadn't really worked out the details of how we were going to do this. Some things worked and some things didn't.”

As they worked through the kinks and found ways to effectively connect with students and meet their needs, the experience improved for everyone. The graduate students filled a void Hart either couldn't, because it wasn't her area of expertise, or simply didn't have time to get to.

“I still do quite a bit of teaching, but it's very directed,” he said. “One of the problems we found early on was we are not like these teachers. We know our topic area, but we're not very good at preparing a class plan for sixth-graders. But what we can do is we can provide much deeper expertise than a general teacher can.”

Patel, who finished her master's degree in May, said she and the other graduate students offered Hart's students another resource to answer their questions and represent the STEM fields to them.

“We provided a unique perspective on the topics, and this access allowed the students to ask more questions and explore the subject matter in depth to really engage them in the material,” Patel said. “I think that by regularly interacting with STEM practitioners, the students began to relate and realize they can do this too if they wanted.”

Last year Hart's class did poster presentations; Patel and chemistry graduate student Jo Ramos-Lewis taught the students how to present their research, and the students hung up their posters in the hallway so their parents could see.

The program also introduces students to graduate education, which gets them thinking about their futures and teaches them problem-solving skills since technology has invariably gone wrong in the middle of a hangout.

Hart's program started under the GK-12 grant, of which Casadonte was the principal investigator (PI). Hart works in Casadonte's chemistry lab and expressed interest in doing distance learning with her students. The grant paid for the classroom tablet set and provided stipends for Hart and the other graduate students. 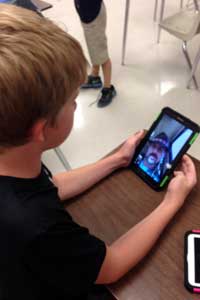 “The GK-12 grant helps increase the communication skills of graduate students by sending them out into the K-12 environment to perform some kind of activity or engage with K-12 students,” Casadonte said.

Too often, he said, students never connect what they learn in math class with what they learn in science class. He created cohorts of math, science and technology teachers and math, science and engineering graduate students and had them create a curriculum for secondary students. Graduate students spent time in the classroom answering questions and teaching principles, which gave them teaching experience while teachers increased their content knowledge.

Two years into the six-year grant, they added virtual teaching as an additional way of interacting with students. Hart's program came in during the grant's final year, but it was good enough that everyone involved wanted to keep it going.

“Robin's program worked very well,” Casadonte said. “Robin's in a fairly affluent school district, the kids she has are all very bright kids, they're technology savvy, and Robin's technology savvy. That technology all came together in a very, very nice way.”

Casadonte visited with Dwyer, who administers the Innovation through Institutional Integration (I3) grant for the university and was an initial co-PI on the GK-12 grant, and told him about Hart's project. One of the purposes of the I3grant is to coordinate the existing STEM grants on campus and support local math and science clubs in the area, particularly in more rural school districts where students may not have access to as many STEM role models.

Provost Lawrence Schovanec, who is the official PI on the I3 grant, said these awards   represent Texas Tech's long-standing commitment to STEM education and engagement with the local community and schools.

“Texas Tech's involvement in STEM initiatives is part of our efforts to expand opportunities for more students to enroll and succeed in college, especially low-income and underrepresented students,” he said. “These grants support innovative educational and research opportunities that enable us to affect STEM education of students at an early age, which hopefully translates into greater student success when they enroll in college.

This is the final year of the I3 grant as well, so Hart isn't sure about the future of her research, but Dwyer is looking for a way to help it along. Following on from that grant Texas Tech created the STEM Center for Outreach, Research & Education (STEM-CORE), which seeks to develop a funding mechanism for these types of programs.

Upon completion of her studies, Hart plans to continue teaching middle school for several years, then she may consider teaching on a college level. For now she's focusing on being a better teacher.

“I think the fact that I'm going to school makes me a better teacher because I'm inspired to do projects that I learn about in my education,” she said.

The involvement with middle school students benefits the graduate students as well, Patel said. She appreciated not only the teaching experience but also the interaction.

“This experience changed me immensely,” Patel said. “The students' curiosity and eagerness to learn influenced me. I woke up motivated and excited to hear what questions they had in store for me that day.”

Ask the Experts: Coping with Stress