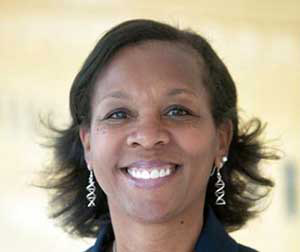 Middle school students in a Washington, D.C., classroom built rain gauges out of soda bottles. They constructed a model weather satellite of candies and other snacks. They tracked rainfall and observed how water molecules adhere to each other.

Halfway around the world and in a time zone five hours later, middle school students in Nigeria completed the same assignments. They took part in video chats with the D.C. students to discuss their science projects and blogged about the unique global science project facilitated by a Texas Tech University Global Pragmatic Research in Science Education (PRiSE) graduate student.

Florentia Spires is in her second year of a doctorate degree in curriculum and instruction through Texas Tech's College of Education. Her online degree is part of the global science education program, and she's going as global as possible – hence the combination of classrooms separated by almost 6,000 miles of ocean.

“Most children in D.C. routinely travel no more than 50 miles from where they live in their lifetime,” she said. “By exposing students to something they've never imagined, it may impact them to think differently and on a larger scale than they would have ever imagined they would think.”

Spires, who lives in the Maryland suburbs of D.C., returned to school after years of teaching. She was a master educator for NASA, she was a National Science Foundation Albert Einstein Distinguished Educator fellow and former Peace Corps volunteer. Her most recent achievement is a Helen DeVitt Jones part-time graduate fellow through Texas Tech's graduate fellowship program, a fellowship that funds various research projects from multiple disciplines. 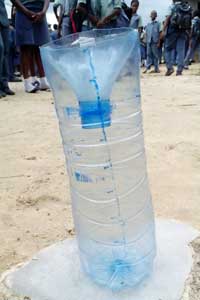 ALSCON middle school students put their homemade rain gauge to the test as part of a semester-long global precipitation project.

“Texas Tech is pleased to support Ms. Spires with a Helen DeVitt Jones Part-Time Graduate Fellowship,” Graduate School Dean Mark Sheridan said. “Her work will have an immediate and lasting impact on a global scale.”

Spires used that fellowship to teach a group of children the importance of water, how to measure rainfall and that engagement in science can be full of essential knowledge and enjoyable.

“Science can be fun,” Spires said. “It's just that as an educator, you have to know how to present the material in a way that excites student curiosity.”

Spires has been in education for most of her adult life, both in the D.C. area and in southern Africa. For 11 years, she taught in Botswana, initially as a Peace Corps volunteer teaching students, then training other Peace Corps volunteers to be teachers. She returned to the classroom for a time before returning to the United States.

When she returned to the U.S., she taught in the same district from which she graduated high school. She earned a master's degree at Loyola University in curriculum and instruction in K-12 science education, then was selected as a NASA fellow and earned certification in science, technology, engineering and math (STEM) from Columbia Teachers College.

A stint as a NASA master educator for the Global Precipitation Measurement (GPM) mission followed. She was one of five educators nationwide developing curriculum materials for the GPM mission, which allowed her to participate in the Feb. 27 launch of the GPM satellite. The satellite records precipitation data throughout the globe and gives scientists better insight into the impact water has on the Earth. 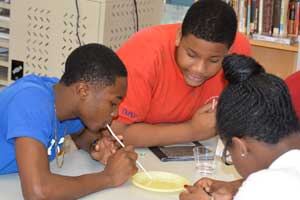 Howard University School of Mathematics and Science students test how water molecules adhere to each other as part of a semester-long global precipitation project.

Spires enrolled at Texas Tech in August 2013, having found the university because of its global science program. For a global science education project, she settled on the NASA mission as a foundation and selected Hector Telford's Howard University Middle School of Mathematics and Science class as her local classroom. With assistance from the Schlumberger Excellence in Education Development (SEED), she located ALSCON Staff School in Akwa Ibom State in Nigeria. SEED also helped transport materials between the U.S. and Nigeria.

She prepared a curriculum focused around the GPM satellite and the overarching theme of how water affects society. Spires' goal was to turn 50 middle school students into global science citizens who sought to understand the importance of precipitation and gain perspective beyond the region in which they lived.

“The kids really loved the creative process of learning about the GPM satellite,” she said. “None of them have done anything similar to this project in their school experience until now.”

The curriculum for both schools included building rain gauges out of soda bottles as well as designing and building infrastructure for commercial rain gauges, which Spires' fellowship funded. They analyzed how well the homemade rain gauges worked compared to the commercial gauge, then compiled a data analysis to determine what accounted for the difference in efficiency. 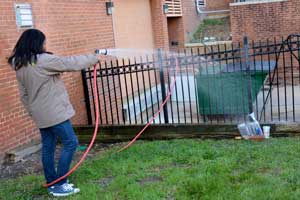 A student at Howard University Middle School of Mathematics and Science in Washington, D.C., tests the rain gauges the students made as part of a semester-long global precipitation project.

Students also constructed their own GPM satellites, but instead of scientifically tested materials, they used marshmallows, graham crackers, wafers, candy and other treats. Besides tasting good when they were finished, constructing the satellites enabled the students to identify and explain the functions of each piece and its importance toward the mission's goal of data collection efficiency.

“They really enjoyed and embraced the NASA assets to learning,” Spires said.

Although she wasn't in Nigeria with the other class, she regularly led communication sessions through ooVoo, a video chat service. She sent the same curriculum and activities to both classrooms. When it came time to build an edible satellite, she offered to send money for the building supplies; eliminating the burden of cost helps alleviate the overall challenge of a global project.

“I didn't want to put such a burden of cost on their school,” she said.

Her Nigerian global educator, Ubong Udomah, declined the offer, and the Nigerian students created satellites out of U.S. and Nigerian foodstuffs, which provided a unique finished product next to the American-made versions. 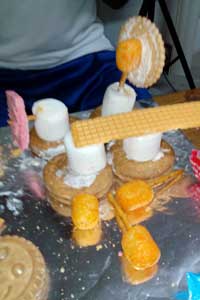 It wasn't all measuring precipitation and eating Necco wafer spacecraft, though. Spires' students on two continents learned how a raindrop behaves as it falls and how water molecules stick together. They looked at pictures of molecules taken with high-speed photography so they could observe the behavior of the droplets.

Students also studied the effects of water, including its relationship to drought, flooding and water-borne diseases like malaria, and the importance of water in the ecosystem. D.C. and the Delta region of Nigeria are both wet areas, so many of the students had never thought about the need to conserve and reuse water, Spires said.

“They became more cognizant of the need to recycle water as much as possible and have come to realize they should value water as a natural resource,” she said. “They're learning a lot of different facts relevant to their own lives about the importance of water.”

Like any project, this one had its kinks. One difficulty was the Nigerian students were delayed when the government closed the school for two weeks to help contain the Ebola outbreak. However, they're basically caught up, Spires said. Both groups remain enthusiastic about video chats and blogging opportunities, sharing their data with each other and discussing the most abundant uses of water in their countries.

Additionally, the two school systems have different schedules for holidays and start and end days. In September, the American students were at the start of their semester, while the Nigerian students were in their ninth month of year-round schooling.

The classroom portion of the project is nearly complete, Spires said, although she'll continue collecting data from the schools. The students took a pre-test and will take a post-test to see how much they learned through her curriculum, and the American students can contribute their data to a national precipitation database known as the Community Collaborative Rain, Hail and Snow Network. The database is not yet available to the Nigerian students, she said. 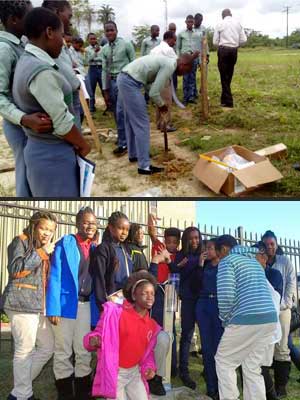 Students from both locations place their their precipitation gauge at their final locations.

“They're actually contributing to something much bigger than any one area in the country,” Spires said. “The phenomenon of doing ‘real science' is just one factor that encourages students to continue the work that they see affects so many people on the Earth as well as themselves.”

Spires is a full-time master educator for the D.C. school district, which means she teaches the teachers. She's using her research to figure out the best way for teachers to reach students and help them break down traditional barriers in education. She also frequently reminds teachers to collaborate not only with teachers across the hall but also teachers across the globe.

“When you're doing research projects in two different nations, students see similarities and differences in the materials they have compared to what their partners have,” Spires said. “You still get the same things done in terms of ingenuity, what you have to work with, how you think.

“Students are thinking different, out of the box, not one pathway.”

A few years ago Spires was at a local farm, surrounded by dozens of students and their parents learning about farming. She noticed a teenage girl staring at her, and Spires' mother asked her if she recognized the family. Spires didn't. Before she left, however, the girl's mother approached her and asked if she had ever taught at an area school. Spires said she had.

“My daughter knew it was you,” Spires remembered the woman telling her. “She was to shy to talk to you, but she's a senior now. She's going to college and studying science and it's because of you.

“It's really important to expose children to global education. Some of them will take it and will run with it. This is only one important way we as leaders in the educational community can contribute to the increase in students becoming scientists, technologists, engineers and mathematicians. If they can see the big picture up close, they can imagine it for themselves. If students don't take advantage of the insight gained due to different areas of interest, at least they have been exposed and they know it is an option or they can simply pass on the knowledge in hope to make a global impact.”