Kurt Caswell spent a summer in Iceland, hiking its natural wonders and exploring its literary heritage. 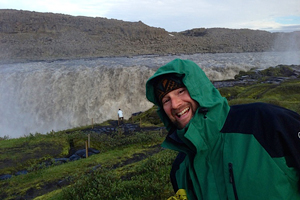 Kurt Caswell's first night on the north tip of Iceland wasn't much of a night. The boat dropped him and his friend off in Hornstrandir at about 4 p.m. They had a 16-kilometer hike through rugged, rocky terrain to get to their campsite. Sometimes they had a trail, sometimes they didn't. There were no other people.

“Sometimes you're just forging across this boulder field,” the Honors College professor of creative writing and literature said. “You're hopping from boulder to boulder for miles, following these 4- to 5-foot-tall cairns.”

They finally made it to their camp at about 11 p.m., just in time to witness what passes for a sunset in northern Iceland, which sits close enough to the Arctic Circle that the sun doesn't set.

“The sun was just kind of hanging out right there on the horizon, and then it sort of dipped behind this headland and then came back out,” he said. “It was a very interesting moment.

“It was this cold and windy and weird twilight that went on all night.”

Caswell spent half of his 2013 summer in Iceland as part of a humanities grant, studying original texts of Icelandic literature and backpacking through the countryside. When he and a friend began the trip, they planned to walk from town to town, but quickly learned this meant they'd see a lot of cars and roadside but not much of the real countryside. With that realization, they took buses from town to town and then hiked out to different locations for three or four days at a time. 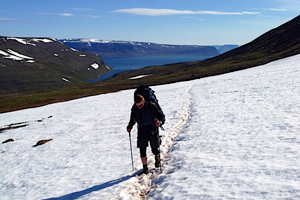 “It's just this wild landscape with no people in it, really,” he said of the small Nordic island.

In honor of National Take a Hike Day, Caswell shared his most memorable moments from the trip, tips on how to enjoy hiking, where to hike safely in West Texas and the surrounding area and why Lubbock could benefit from a few more sidewalks.

Caswell's travels led him to Egilsstadir, a lake in eastern Iceland where, according to legend, a monster lives. It was last seen in 2011; a farmer saw the giant worm-like creature while drinking his morning coffee, so he filmed it with his phone and put it on YouTube.

“We went to the lake and sat on the lake for about three hours waiting for the monster to show up, and unfortunately, it never appeared,” Caswell said.

In a column he wrote about this adventure, he expounded on how, as a traveler in a foreign land, it felt strange to spend his day just sitting and waiting for something to happen, even with the aid of the rum his friend brought. Not always being on the go is part of experiencing a country and culture too, he wrote.

Hornstrandir, which is the closest part of Iceland to Greenland, is now a nature preserve, home to much of the island's Arctic fox population. Arctic foxes are the only mammal native to Iceland; all others were brought over by early Icelandic settlers. Hornstrandir is only accessible by boat and there was little in the way of infrastructure, so they camped, cooked their own food and walked around what felt, at times, like another world.

“I'd read from another writer that when you're in Iceland it really is like the world of Beowulf and Grendel, like you've gone back in time,” Caswell said. “If we felt that anywhere it was up there, right in the Hornstrandir.”

Another of his favorite treks was to Dettifoss, said to be the most powerful waterfall in Europe and the background for the opening scenes of the 2012 movie “Prometheus.” Instead of taking a bus, he and his friend hiked the trail along the top of the gorge, drinking in the views overlooking the sheer canyon to the river below. 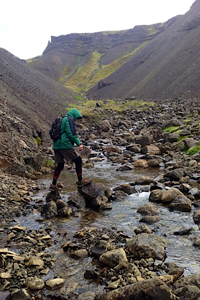 Caswell spent a summer in Iceland, hiking its natural wonders and exploring its literary heritage.

His trip wasn't all picking his way over rock fields and traipsing along river gorges. Caswell spent a couple of weeks in Reykjavik, Iceland's capital, waiting for access to a manuscript archive in the Árni Magnússon Institute for Icelandic Studies that has originals of some of Iceland's medieval literature. Even with only 330,000 people in the world speaking Icelandic, the language and literary tradition remains alive and vibrant.

“Some scholars call it one of the great wonders of the world, especially in the world of storytelling,” Caswell said.

The sagas follow real Icelanders on their adventures through real Iceland. Most of the people are not quite as heroic as Beowulf, the subject of the well-known epic poem. The protagonists aren't always particularly likable either, and some of them got rather violent.

“They're not superhuman, but they're super interesting,” Caswell said.

Exploring in and around Lubbock

Caswell has lived in Lubbock for nine years but admitted he hasn't done much exploring of the typical Texas offerings – Dallas, Houston, San Antonio. That's not to say he hasn't explored, he just usually heads west instead of east for his travels.

He also recommended just walking around the city. Caswell grew up in Alaska, Oregon and Idaho and, up until moving to Lubbock, had the option of walking a few steps out his back door and finding himself in the wilderness. He still walks around Lubbock, although he wished the city would use sidewalks and greenways to encourage people to get out of their cars. With so few sidewalks in Lubbock, he doesn't feel safe walking in many parts of the city, nor does he appreciate the scenery of passing cars and road signs.

“It seems to me that since our world is so centered now around the automobile, it's really difficult to find places that are pleasing to walk,” he said. “It seems that people who want to travel on foot are pushed out to the fringes. I just don't know why a city this size with so many students doesn't care about their pedestrians.”