For a 56th year, the Texas Tech campus will illuminate with more than 20,000 colored lights.

On Dec. 2, Texas Tech University will host its 56th annual Carol of Lights holiday event, “Celebrating Spirit and Tradition.” The event begins at 6:30 p.m. with the Carillon Concert and will be followed by the lighting ceremony at 7 p.m. at Memorial Circle and the Carol Concert at 8 p.m. at Hemmle Recital Hall.

Due to Thanksgiving falling later in the month of November and final exams starting the week after Thanksgiving, Carol of Lights has been moved from Friday to Tuesday in order to support academic success.

“Ruthie and I experienced the Carol of Lights for the first time last year and was moved by the pageantry and fellowship of this wonderful tradition,” Texas Tech President M. Duane Nellis said. “Our student leaders and staff associated with the Carol of Lights should be commended for their work over the years and dedication to making this a truly memorable event.”

Hosted by Residence Halls Association (RHA), the festive event features performances of traditional carols by the Texas Tech choirs and a torch-light processional led by the university's Saddle Tramps and High Riders spirit organizations. The processional will start at the university seal at the Broadway entrance and follow the luminaria-lighted route around Memorial Circle to the Science Quad.

Since its beginning in 1959, the annual event has grown to more than 20,000 people in attendance. 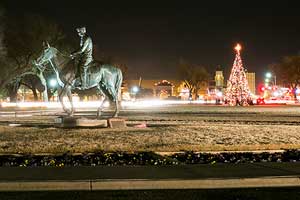 Preparation for the event began in September and continues through the week before Thanksgiving. More than 20,000 red, white and orange lights are hung up and connected through one strand on 18 buildings around Memorial Circle. As Texas Tech and RHA work toward increased sustainability, more than 80 percent of the lights will be LED bulbs, significantly reducing energy consumption for the campus. The lights are expected to be 100 percent LED by 2015.

This year, RHA will feature a new Carol of Lights tree that is sturdier than the old tree that had been used since 2002. RHA also has long-sleeved T-shirts for the Carol of Lights event available for purchase for $17.50 at Texas Tech's bookstore in the Student Union Building.

Immediately following the ceremony, the Texas Tech School of Music will host its annual Carol Concert.

“Carol Concert is a wonderful way to start the holiday season and a great follow up to the Carol of Lights ceremony,” said Joe Svendsen, School of Music instructor and conductor of the Matador Singers. “The concert will feature familiar and new holiday songs from all four of Texas Tech's choirs and the West Texas Children's Choir. The audience will be invited to sing favorite carols along with the singers.”

Tickets for the Carol Concert range from $8-$14 and can be purchased online or at the door the night of the event. Admission is free for Texas Tech students with a valid student I.D.

This year, local residents unable to attend can listen to the ceremony live on KTXT-FM 88.1 radio or watch the event online. Details concerning the online broadcast will be announced at a later date.

The Silent Raiders will provide signers for those with hearing impairments. Any individual needing special accommodations related to a disability can email RHA for assistance at rha@ttu.edu.

“We are excited to celebrate the holiday spirit and Texas Tech tradition with the 56th annual Carol of Lights celebration,” said Craig Kuehnert, Carol of Lights adviser and assistant director for student leadership development. “We invite everyone in the Texas Tech and Lubbock communities to join us as we kick off the holiday season with traditional carols, torch-light processional, Texas Tech mascots, and of course, the lighting of over 20,000 lights in the center of campus.”

The lights will be on from dusk until midnight through Jan. 1.