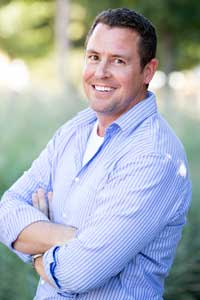 The Texas Tech University doctoral student, who is in the Land Use Planning, Management and Design program, defended his dissertation in early October, describing in 100 pages how wetlands are constructed and why the United States may not be doing as well in wetland restoration as experts thought.

“We're at a point now where the land is so developed, every last square foot is accounted for,” he said. “People are literally starting to put price tags on natural resources, and this is something that's been talked about for 10-20 years.”

Working with Robert Cox, an associate professor of habitat restoration ecology in the Department of Natural Resources Management, Plummer created a project allowing him to study wetlands created by ecologists after natural wetlands were destroyed in development. The for-profit projects are created on behalf of developers who destroy the wetlands during development; the law requires developers to mitigate the damage. His research focused on how well wetland mitigation banks actually function – that is, are they a legitimate replacement for the natural wetlands destroyed by development? Is the wildlife thriving? Most importantly, is the water flow working?

“What really drives a wetland is the underlying hydrology. It's the precipitation, it's the runoff, it's the ponding – any H20 on that site factors into its hydrology,” he said. “For wetlands, water is what drives everything. If you're focusing on anything else, you're really not looking at the locomotive, you're looking at the caboose.”

He examined reports for 70 wetland mitigation banks throughout the nation and he found that, although these banks are meeting the legal requirements as set by the Clean Water Act and the Army Corps of Engineers is checking off on the wetlands after the required five years, these developments are not what they should be.

“Five years sounds like a long time, but it's not that long when you're looking at restoring an ecosystem,” Plummer said. “So it might look good for five years, but if you haven't established that underpinning of a good hydrologic framework it's not going to pan out in the long run.” 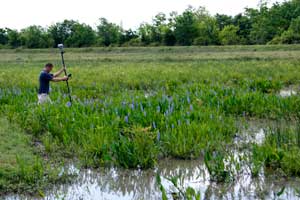 His research somewhat upends the ideas politicians, developers and ecologists have about these wetland mitigation banks.

“This is something I think that's new in his research that there's going to be some interest in,” Cox said. “This really is something that's unique. It's going to make a difference for how we plan and conserve wetland biodiversity across the United States.”

Delving into the research

Since Europeans settled America up until the 1980s, wetlands in the way of development, commercialization or mining were often just destroyed. In 1972, Congress passed the Clean Water Act, which eventually required developers to replace every acre of wetland destroyed. Instead of a few acres here and there, all put in place by developers, corporations hired ecologists to create wetland mitigation banks. Developers could buy shares in these banks, often thousands of acres in size, which were then developed into wetlands.

“Instead of these tiny little wetland restoration projects, which aren't going to amount to anything, you have one massive, robust site which can really develop into a true wetland,” Plummer said. “It can support the wildlife, it can support the vegetation and it can really grow into something authentic.”

By many accounts, this program has been successful. It's a billion-dollar industry for the people constructing the wetlands, and thousands of acres of wetlands have been constructed. All of these wetland mitigation banks also have a conservation easement, which means the wetlands must remain undeveloped, no matter who owns the property.

“It's a little controversial about how well the mitigation banks are actually doing that, but just in terms of number of acres, we probably have more wetlands now than we did in the 1980s, largely thanks to those mitigation banks,” Cox said. 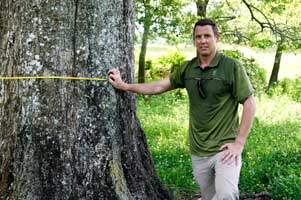 His dissertation describes how wetlands are constructed, and why the United States may not be doing as well in wetland restoration as experts thought.

But, as Plummer learned in studying the literature around these wetlands, simply existing does not indicate high functionality. Often the ecologists constructing the wetlands equate reconstruction with an abundance of plant life. Even if the plant species are natural to that area, wetlands don't start with plants and they don't survive with plants. The wildlife should come second to the underlying water system, but too often, in a rush to get the wetlands functioning within the five years the Army Corps of Engineers assesses these banks, wetlands developers just focus on plants, to the eventual detriment of the ecosystem.

“It's not so much a question of imposing our thumbprint on the land but really seeing what nature can do on her own and how we can help facilitate those natural processes,” Plummer said. “What I discovered is that many of these banks are being designed with that heavy thumbprint where they'll go in and they'll literally plant tens of thousands of saplings in rows. When people talk about restoring the land, they're like, ‘well, let's go in there and plant as many trees as we can and that's restoration,' but what the really leading-edge scientists are saying is no, that's not restoration.

“If you develop the hydrologic system effectively, nature will take care of all the plants down the road. It may take 10-30 years, but one of the principles of ecological restoration is simply giving the system time. You can't expect success in five years.”

Getting along with nature

A significant part of Plummer's research was the realization that to restore natural ecosystems, ecologists need to work with nature, not fight against it.

“What we can't forget is that we are wedded to this planet's natural systems,” he said. “We live in an age where it can be easy to forget that.”

The result of that is highly developed countries that have either literally or figuratively built walls to keep nature away from civilization. Plummer cited the Netherlands and Hong Kong as examples; for hundreds of years the Dutch have built dikes to stop their land from being flooded. Today, Plummer said, they're starting to think more like the ancient Egyptians, who got out of the way when the Nile flooded and returned when the waters receded to dense, nutrient-rich farmland. 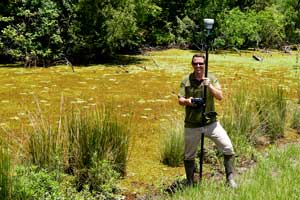 To restore natural ecosystems, Plummer discovered that ecologists need to work with nature, not fight against it.

What this means to West Texas

Plummer had to travel to work on his project; there just aren't many protected wetlands in the drought-plagued farmland of West Texas. The inspiration started here, though.

“There's not a lot of wetlands in the area, except we do have a lot of playa lakes, and almost all of the playa lakes have been really heavily modified, altered, damaged, degraded, paved over, filled in or plowed up,” Cox said.

The playa lakes were an early part of their discussions, Cox said, but Plummer wanted to look elsewhere, which led them to the wetland mitigation banks.

He's working as a landscape architect for a local firm, and Plummer said, at least for now, he has no plans to leave. He does plan to put his research to good use, however. The process of analyzing and properly restoring land is similar, whether the land in question is the wetlands of Louisiana or the oilfields around Midland and Odessa.

He also anticipates being a more science-oriented landscape architect.

“I see a different way of designing where, in the beginning, at least, you're simply trying to undo all the past blundered attempts where people went in with heavy hands and tried to force natural systems to behave in a way that just wasn't natural,” Plummer said. “You're really just trying to let the site be what it always was in the first place.”

His work also opened an opportunity for him to teach at the university.

Plummer, a native Pennsylvanian who came to Texas Tech after years of working in Dallas, is happy to be here.

“I'm proud to say I'm a Texas Tech student and a Red Raider,” he said. “It was a good experience.”