The bronze-casted sculptures depict the Texas Tech mascot down to the smallest detail. 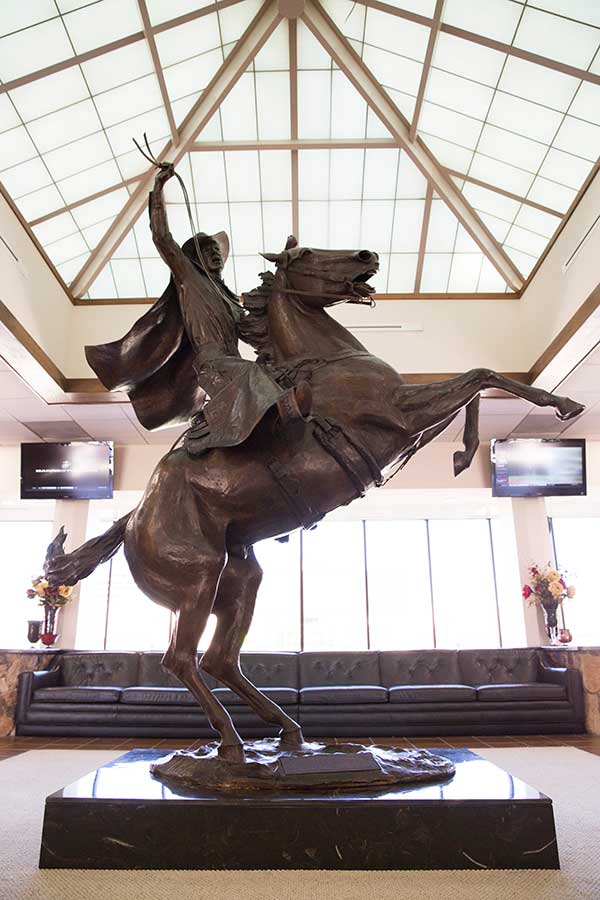 As the Red Raiders made their television debut on Jan. 1, 1954 at the Gator Bowl in Jacksonville, Florida, Texas Tech student Joe Kirk Fulton conquered one of the greatest entrances in football history as he rode onto the field with his horse Blackie, clothed in scarlet and black.

In honor of the tradition's 60th anniversary, Texas Tech Today looks at the three Masked Rider statues on campus that commemorate its importance and spirit.

“The fact that the statues are in motion makes them great representations of the Masked Rider,” said Mackenzie White, this year's Masked Rider. “The statues capture a snippet of the ‘chills down your spine' emotion the crowd feels when the Masked Rider runs onto the field.”

Rearing up at the south end zone of Jones AT&T Stadium in the Masked Rider Lobby, Joe Kirk Fulton and horse Blackie stand up tall in bronze casting, depicting the original dress of the Masked Rider uniform from 1954-1956. The sculpture signifies the tradition's historical beginning and its unique prominence as it still stands today as one of the most recognizable mascots in the nation. 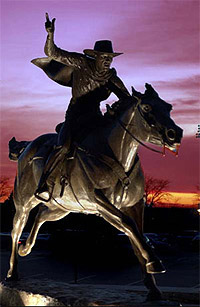 Due to its large size, the sculpture had to be lowered in through the roof of the Masked Rider lobby by a crane.

This is one of three bronze sculptures the late Grant Speed created for Texas Tech. Speed was born in San Angelo and resided in Lindon, Utah, until his death in 2011. He was most notably known for his bronze sculptures and was involved in the Cowboy Artists of America.

Rising high on a 4-foot-tall platform behind the Frazier Alumni Pavilion, the 25 percent larger-than-life depiction of the Masked Rider represents the well-known tradition as the rider rides out onto the field before each game. In full gallop, the black American Quarter horse rides toward the stadium while the rider holds the “Guns Up” sign high above its head.

Also created by Speed, this $300,000 statue launched a fundraiser in which miniature Masked Rider statues could be purchased for $7,500. Donors also could purchase a brick bearing their name for $100 that is included in the paving around the pavilion.

Names of all former Masked Riders and their horses are etched into bricks near the granite base of the sculpture.

This piece is a part of Texas Tech's Public Art Program. 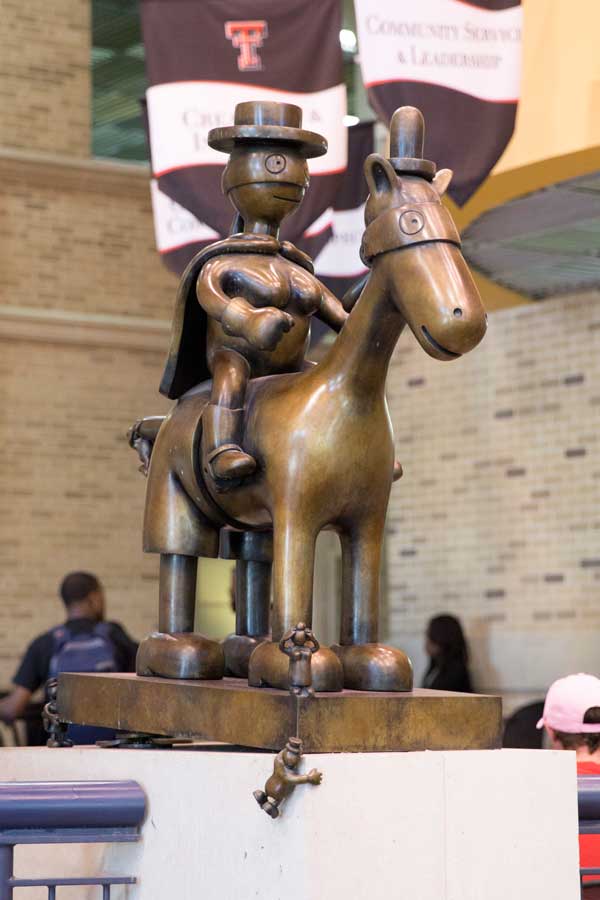 When walking into the Student Union Building (SUB), Tom Otterness' little, bronze cartoon characters can be seen in the nooks and crannies of the building, including a cartoon version of the Masked Rider. Mainly known for the tornado sculpture in between the SUB and the Texas Tech Library, Otterness created these characters as a complement to his main tornado piece.

This specific Masked Rider sculpture is larger than the other characters in Otterness' collection. His version of the mascot depicts the Masked Rider atop of the horse, kicking its “feet triumphantly in the quest for truth,” as the artist describes.

Otterness resides in New York City and is known as one of America's most prolific public artists. Many of his pieces can be seen around New York City. His style is often described as cartoonish but also political.

This art collection is a part of Texas Tech's Public Art Program.