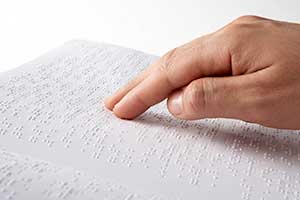 Implementation of the new braille language will begin next year.

Professor Rona Pogrund is representing Texas Tech University in a stakeholders meeting Nov. 4-5 in Austin to discuss how the state will implement new standards for braille, which were adopted two years ago. The Texas Education Agency and Region 11 Education Service Center are sponsoring the meeting.

Pogrund is a professor of special education in the College of Education at Texas Tech, but her office is at the Texas School for the Blind and Visually Impaired (TSBVI) in Austin. She coordinates the Teacher of Students with Visual Impairments (TVI) program for Texas Tech.

In 2012, the Braille Authority of North America (BANA) voted to adopt Unified English Braille (UEB), the language the rest of the English-speaking world uses. The United States has used the English Braille American Edition (EBAE) since 1959, and there have been few changes to it in that time. Implementation of the new language is expected to start next year, and each state must have a plan on how to move forward with UEB education.

“It was discussed a lot and talked about a lot, but I didn't pay much attention because it's been talked about for several years,” Pogrund said. “It's a huge shift to make a change like this.”

The stakeholder group of which Pogrund is a part will be discussing Texas' plan to implement UEB into its curriculum as well as producing training programs and materials for both teachers and students. Representatives from TSBVI, statewide school districts, education service centers and braille production specialists also are part of the meeting, as is a professor from Stephen F. Austin State University, the only other Texas university with a TVI program.

UEB is not a new language, Pogrund said; many of the symbols and rules remain the same. Several contractions were eliminated and a number of new symbols have been added to accommodate Twitter, the Internet and computer terms that didn't exist when EBAE was created. People who know braille have read literature in UEB and have figured out the basic concepts, she said.

She recently looked through the new textbook and familiarized herself with the changes. However, Pogrund, who teaches braille to teachers who want to work with students who are visually impaired, will have to learn it, then change her course curriculum. She can't do that until the state braille tests have been changed, and that won't happen until the stakeholders have an implementation plan.

In fact, until UEB is implemented, she'll continue to teach the traditional braille, meaning she's teaching a subject she knows her students will have to relearn. Since they need braille now in order to be certified as TVIs, she said, she'll teach EBAE until the state tests and curriculum change.

“I know this is coming, but I can't teach it,” she said. “We're all going to have to go to in-services and get up to speed.”