The project is now in the fundraising stage to create the High Cotton Center. 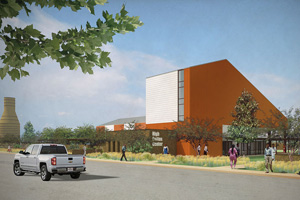 An artist rendering of the High Cotton Center.

At the corner of East 13th Street and Avenue A in Lubbock sits an old cotton gin at the front of a large lot. On the back of that lot are several tents that give an image of an old army encampment.

But this has nothing to do with the armed forces. This lot, known as Tent City, houses Lubbock's homeless population, which in recent years has been moved from the area outside the downtown branch of the public library to the corner of Broadway and Avenue Q to its current location as plans for downtown redevelopment began to take shape.

The City of Lubbock, however, is doing more than just finding a convenient, out-of-eyesight location for its homeless. And Texas Tech University's College of Architecture has played a large part in providing the Lubbock homeless a better place to live.

Through Link Ministries, a faith-based non-profit organization that operates Tent City, plans have been devised and fundraising is underway to create a new homeless assistance facility on the lot at 13th and A, known as the High Cotton Center.

Urban Tech, the College of Architecture's design studio located in downtown Lubbock to aid in redevelopment of that area, teamed with Link Ministries on the ground floor of the project to develop a long-term vision for Tent City. Though Urban Tech's involvement has diminished – by design – as the project has approached the fundraising stage, director David Driskill said the experience was tremendous for both him and his students.

“It's meant a great deal to the students and to me,” Driskill said. “I would say that the two years we were very hands on with the project were the most fulfilling two years of my teaching career. I think the students would agree. We all really felt like we were having an impact on what was going on.”

Urban Tech's involvement with the project began in 2011 after the Lubbock City Council relocated the homeless population from the downtown library to the corner of Broadway and Avenue Q. But that presented another problem in terms of downtown redevelopment.

“We're here for downtown redevelopment,” Driskill said. “You can't redevelop downtown if it is indeed the de facto homeless facility.” 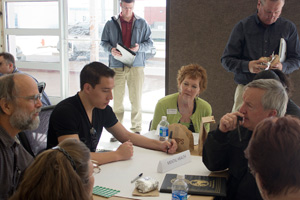 Urban Tech faculty and students were involved in the some of the early design meetings for the project.

Driskill admits, though, that he was of the thought, and a prevalent thought it was, that not much could be done for the homeless other than using the out-of-sight, out-of-mind approach. Link Ministries, however, didn't see it that way.

The more Driskill and students in Urban Tech delved into the project, the more they realized they could make a big difference for the homeless. It started with the creation by the city council of the homeless task force, which brought Urban Tech into the picture. With a small grant and the help of Lubbock community activist Louise Underwood, students at Urban Tech mapped homeless providers, significant services and businesses that dealt with Lubbock's homeless.

Around the spring or summer of 2012, the committee began gathering data from service organizations such as the Salvation Army, food agencies and providers on what services best help the homeless. Out of that came areas where it was obvious services didn't reach the homeless, and the committee formed its priorities for what needs to be provided in a homeless facility.

From there, the committee then set out touring several larger cities in the region such as Dallas, Oklahoma City and San Antonio. They were particularly struck with the Haven for Hope organization in San Antonio, which provides homeless with 90-day treatment programs for drug and alcohol addiction.

The following fall, the committee teamed with Lake Flato Architects to develop a vision for therapeutic facilities serving the local homeless population. Link Ministries, happy with the work Urban Tech had done, approached the group about designing the whole project. But Driskill said the project needed to go to a professional firm, so in fall 2013, Link Ministries and High Cotton joined with HiWorks Architecture, Urbanist Design and Studio Outside Landscape Architects to produce a conceptual design for the High Cotton site. 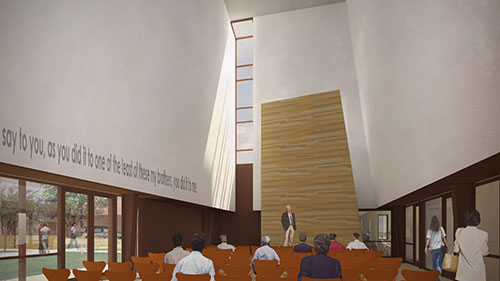 Artist rendering of the inside of the High Cotton Center.

In April, the conceptual designs for the High Cotton facility were revealed during Lubbock's First Friday Arts Trail. That began the second, and possibly most challenging part of the project – fundraising, which Urban Tech and the College of Architecture have no dealings with in any way.

“We thought tents would be a better environment than bunk beds in some big space,” Driskill said. “The challenge now is trying to get the $10 million for the project. (The community committee) is trying to raise funds now when so many people feel the way I used to feel in that we're just throwing money down a rabbit hole. The other part is that the community is very focused on a performing arts center. That's really important to happen for Lubbock, but trying to raise money for the homeless facility at the same time is really tough.”

Still, the work done in helping design a new homeless facility for Lubbock has been extremely rewarding for Driskill and his students, and they can take great pride in knowing they're helping to better the homeless situation in the city.

“Every day I get at least one call from a potential resident that I have to turn down because we're at capacity and have a waiting list,” said Les Burrus, Link Ministries director. “It's a good sign that our services are helping people in the community, but it's also a sign that it's time to grow.”