Johnny Bob and Katie remain the only father and daughter to serve as beloved mascot. 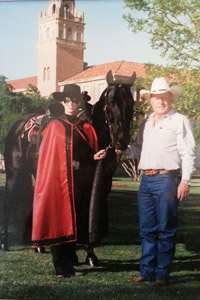 What started off as a desire to represent Texas Tech University resulted in the only father-daughter combination to serve as Masked Rider.

When Katie Carruth applied to be the Masked Rider, she said she loved the tradition and history of the program but also was proud of her father, Johnny Bob Carruth, for taking the reins first. Her children feel the same way.

“It is such an honor to represent the students and athletes of the university,” Katie said. “There are many amazing people who not only remember me, but also remember when dad was the Masked Rider. It's wonderful to know you are a part of their experience and memory of Texas Tech.

“My children are in awe and totally convinced I'm a celebrity.” 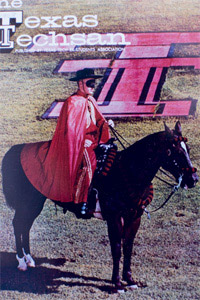 Johnny Bob decided to become the mascot because he wanted to represent the university and believes being the Masked Rider is a true representation of Texas Tech.

The Carruths loved their times as Masked Riders, and they often discuss how much fun they had representing Texas Tech, Johnny Bob said. Katie said the knowledge the two have a shared experience created a special bond between her and her father, and she is proud of the legacy they left.

Katie said her time as Masked Rider was different than her father's and her favorite part of participating in the Masked Rider program was the opportunity to meet people, who had been influenced by the program. Johnny Bob said the excitement of football games and of the horse he rode, Charcoal Cody, is what he remembers most from his two years as Masked Rider.

“Charcoal Cody was an exciting and dynamic type of a horse and was really suited to the Masked Rider program, and everybody in the stands and in the stadium just loved it,” Johnny Bob said. “That would be the main thing I remember about it: the excitement of the whole aura back in those days.”

Katie graduated from Texas Tech in 2003 with a bachelor's degree in agricultural communications and a minor in ballet. She lives in Gloucestershire, England, with her husband, who received a doctoral degree from Texas Tech, and their three children. She was accepted into Royal Agricultural College to study International Rural Development: Sustainable Agriculture and Food Security during summer 2013 and is working on her dissertation. 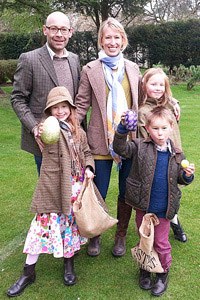 Katie now lives in Gloucestershire, England, with her husband and three children.

Katie still is involved with horses, and said she rides at Cirencester Polo Club and has been fox hunting with the Cotswold Hunt.

“This is the mecca for British Eventing, and we've spent many weekends following some of the world's greatest as they gallop across Badminton, Burghley, Gatcombe,” she said. “We've even watched (Princes) William and Harry battle it out on the polo field while our son and little George played on the sideline. Horses and dogs are central to life in the countryside and it's been a pleasure to participate.”

Johnny Bob graduated from Texas Tech in 1970 with a degree in agricultural education and has lived in Lubbock ever since.

“We bleed red and black through and through within our family,” he said. “My sister is a Texas Tech graduate, my wife is and my children and daughter-in-law are. We think the world of Texas Tech and just feel blessed that we are a part of the Texas Tech family. Graduating from Texas Tech has opened lots of doors for us.”