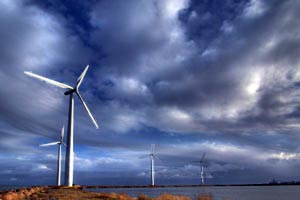 Small adjustments to existing wind farms could be worth millions of dollars.

Texas Tech University researchers will receive $1.4 million from the U.S. Department of Energy to develop a new radar prototype that will provide better measurements of the complex flow conditions in wind plants.

“This project is a testament to our researchers’ commitment to better understand and harness wind energy, and to enhance the methods this technology could have on society,” said Texas Tech President M. Duane Nellis.

The same research team that pioneered the use of radar technology and techniques for wind farm applications several years ago is now focused on developing a new prototype that enhances data availability, and provides semi-autonomous operation.  Enhanced information about flow conditions within a wind plant enables proactive controls that minimize turbine-to-turbine interaction and maximize power generation.

John Schroeder, a professor of atmospheric sciences and principal investigator for the project, said existing wind farms nominally are underperforming relative to expectations. 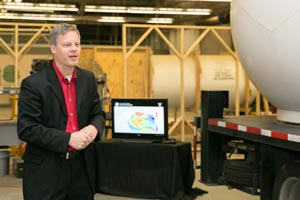 “Wind farms are not putting out as much power as we would expect from them,” Schroeder said. “With a better understanding of how turbines interact with each other, we may be able to make small adjustments that could be worth millions of dollars.”

Having the information before the wind farm is built could make operations better from the start through strategic turbine spacing and placement. Schroeder said the real opportunity would be in enhancing existing wind farms, where subtle changes in the wake of one upstream turbine could positively impact others downstream.

To fully understand turbine behavior, careful measurements are required. Existing radar platforms have been used extensively in meteorological applications but are problematic since they emit electro-magnetic radiation that must bounce off an object to return data.

“The amount of energy that comes back is proportionate to the diameter of what’s out there, such as rain, snow or even birds,” Schroeder said. “In a wind farm setting, there will be large towers and rotating blades contaminating the data. The challenge is in measuring the motion of the air while filtering out those influences.” 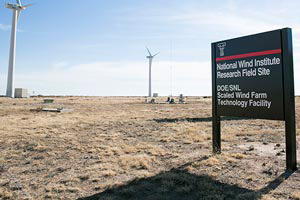 The team will spend 18 months developing the new design that will be specifically designed for wind energy research and focused on enhancing clear air sensitivity relative to the currently available radar system. A system that does not rely on precipitation to generate returns provides for more diverse application. Semi-autonomous operation is also needed to enable long term deployments at varying onshore and offshore locations around the world.

“This is an example of the outstanding technical innovations that are being produced by Texas Tech today,” said Robert V. Duncan, Texas Tech vice president of research. “It is exciting to see this new radar technology emerge, that will be used to optimize wind plant energy production based upon data that we have never had access to before now.”

This project complements the U.S. Department of Energy’s ongoing Atmosphere to Electrons (A2e) Initiative, which aims to improve wind plant performance by increasing understanding of how wind moves throughout wind farms. It also contributes to the effort to advance innovative technologies that reduce carbon emissions and support the President’s goal to double renewable energy again by 2020.

“Our goal is to finish the blueprint for commercialization of this technology, and place it in the hands of users in the industry,” Schroeder said. “If successful, it wouldn’t take long to have a positive impact on lowering the cost of wind energy.”