President Nellis: We Will Never Forget 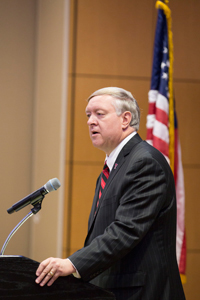 Texas Tech University will never forget those who died 13 years ago on Sept. 11, 2001, as well as those who died fighting for the United States since then, President M. Duane Nellis told students, faculty and staff during a 9/11 memorial ceremony Thursday.

“It can be difficult to revisit that time,” Nellis said, “but it’s important to remember and share the sorrow and sympathies for the families, for our country and how we as a nation have come together since that time. Texas Tech University is truly a steward in the sense of community, supporting the area and region that lends to our success. It’s a priority of our university to participate in the community. Our local and regional collaborations provide opportunity to strengthen the area.”

Nellis, who said he had a friend on the plane that hit the Pentagon, spoke about difficulty in finding a silver lining as a result of the events, and that the compassion and outreach that has occurred since 9/11 are examples of just that. 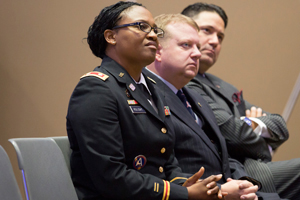 Muñoz said he was in California watching television with his children on that fateful day, and also emphasized the importance of community and the closeness felt after the attacks.

“It’s a day that none of us will forget,” he said, “and we shouldn’t forget those who lost their lives that day and those who have paid the ultimate price since then.”

Holliday’s speech focused on the togetherness of the community as well as the love and pride those who died during and after 9/11 and current citizens have for America.

“In honoring the memories of our fallen citizens, our soldiers of 9/11, I know in my heart, they shared the same deep pride of our great nation,” Holliday said. “It is that bond that holds us together, the strength and passion we have for one another and embrace of love for a nation in which we stand.”